Alakhbar reported that attacks were carried out in response to the killing of one of JNIM's leaders, Mohamed Hacen al-Ancari. 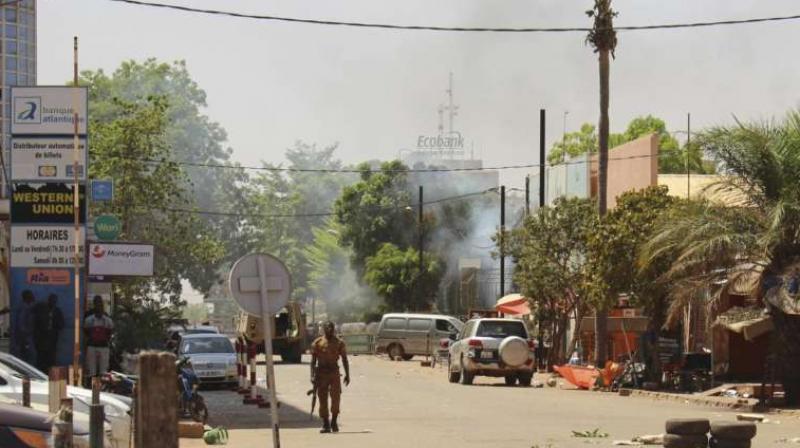 Eighty others were wounded in the coordinated attacks in the capital Ouagadougou, which follow two other major assaults there in the past two years. (Photo: AP)

Eighty others were wounded in the coordinated attacks in the capital Ouagadougou, which follow two other major assaults there in the past two years.

Alakhbar, citing a message from the group, reported that the attacks were carried out in response to the killing of one of JNIM's leaders, Mohamed Hacen al-Ancari, in a recent raid by French forces.

France intervened in Mali in 2013 to drive back Islamist militants who had seized the country's desert north. It retains about 4,000 troops deployed across its former colonies in the arid Sahel region as part of the anti-terror Operation Barkhane and has aggressively gone after militant group leaders.

Previous attacks in Ouagadougou and near Burkina Faso's porous border with Mali were also conducted by allies of al Qaeda in reprisal for Burkina Faso's participation in a regional fight against Islamist militants.

Al Qaeda in the Islamic Maghreb (AQIM) claimed responsibility for attacks on a restaurant and hotel in Ouagadougou in January 2016 in which 30 people were killed. AQIM merged with other local jihadist groups last year to form JNIM.

Suspected jihadists also killed at least 18 people last August during a raid on a restaurant in Ouagadougou.

In a televised speech on Saturday, President Roch Kabore urged the public on Saturday to collaborate more closely with the armed forces.

"In these difficult moments, I would like to reaffirm to Africa and the entire world my unshakeable faith in the capacity of the Burkinabe people to preserve their dignity and ferociously oppose their enemies," Kabore said.

Jihadist groups have regrouped since the French intervention in 2013. They have expanded their operations deep into central Mali, which they have used as a launchpad to strike Burkina Faso, Niger and other regional countries.

Burkinabe authorities said four gunmen were killed at army headquarters, where the assailants also detonated a car bomb, and four more were killed at the embassy. Two attackers were also captured on Friday.

Local residents were left to wonder how their country remained vulnerable to such attacks.

"If the army headquarters is totally wiped out there is a problem," said Souleymane Traore, director of the newspaper Le Quotidien.

"We are really revolted by this insecurity and we must point the finger at those who are responsible."

Security was reinforced on Saturday near strategic sites in Ouagadougou as Prime Minister Paul Kaba Thieba, flanked by ministers from his government, toured the army headquarters and the French embassy.