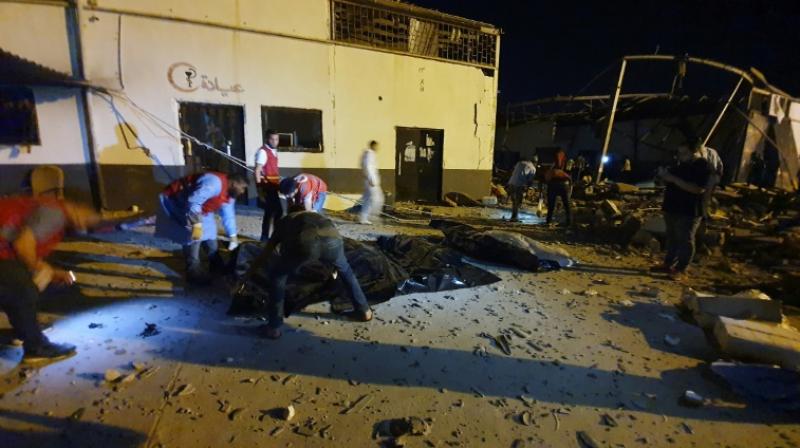 Bodies were strewn on the floor of a hangar in the Tripoli suburb of Tajoura, mixed with the blood-soaked clothes of migrants, an AFP photographer said. (Photo: AFP)

Libya: Outrage and calls for an independent probe mounted on Wednesday as 44 migrants were killed in an air strike on a detention centre in Libya that the UN said could constitute a war crime.

UN chief Antonio Guterres denounced the "horrendous" attack and demanded an independent investigation, as a divided Security Council failed to condemn the strike.

Bodies were strewn on the floor of a hangar in the Tripoli suburb of Tajoura, mixed with the blood-soaked clothes of migrants, an AFP photographer said.

"There were bodies, blood and pieces of flesh everywhere," a survivor, 26-year-old Al-Mahdi Hafyan from Morocco, told AFP from his hospital bed where he was being treated for a leg wound.

Hafyan said he had been detained in the centre for three months, after coming to Libya with a fellow Moroccan hoping to reach Europe across the Mediterranean.

His friend survived the attack unscathed, but his T-shirt was stained with other people's blood. "We were lucky. We were at the back of the hanger."

Tuesday night's strike left a hole around three metres (10 feet) in diameter in the hangar, surrounded by debris ripped from the metal structure by the force of the blast.

At least 44 people were killed and more than 130 severely wounded, the UN said.

The UN shared the coordinates of the Tajoura centre east of Tripoli with the warring sides to ensure that civilians sheltering there were safe, Guterres said.

UN envoy to Libya Ghassan Salame said the "attack clearly could constitute a war crime, as it killed by surprise innocent people whose dire conditions forced them to be in that shelter."

Around 600 migrants and refugees were held in the Tajoura centre, the compound's head Noureddine al-Grifi said, adding that people were wounded in another hangar.

There was no immediate claim of responsibility.

But the Tripoli-based Government of National Accord (GNA) denounced the attack as a "heinous crime" and blamed it on the "war criminal Khalifa Haftar", who in early April launched an offensive to seize the capital.

Wednesday evening a spokesman for Haftar's Libyan National Army (LNA) said: "The (pro-Haftar) forces deny their responsibility in the attack on the migrant centre of Tajoura".

Ahmad al-Mesmari blamed the attack on the GNA, accusing it of "plotting" against the LNA.

Rescuers search for bodies and survivors under the rubble

"We never target civilians. Our armed forces are professional and accurate in their strikes," Mesmari said, calling for an investigation into the carnage.

The United States condemned an "abhorrent" attack and urged a "de-escalation", the State Department said.

The European Union -- echoing many countries and international organisations -- called for an independent probe.

"Those responsible should be held to account", an EU statement said.

The suburb of Tajoura, which has several military sites belonging to pro-GNA armed groups, is regularly targeted in air raids by Haftar's forces.

Charlie Yaxley, a spokesperson in Geneva, said the UNHCR had asked that the centre be evacuated a few weeks ago after "a near miss from a similar air strike".

The centre was thought to have been used to store weapons, he added.

The UN's mission in Libya has said around 3,500 migrants and refugees held in detention centres near the combat zone are at risk.

Wracked by chaos since the 2011 uprising against dictator Moamer Kadhafi, Libya has become a major conduit for migrants seeking to reach Europe and remains prey to numerous militias vying for control of the country's oil wealth.

Rights groups say migrants face horrifying abuses in Libya, and their plight has worsened since Haftar launched the offensive against Tripoli.

More than 700 people have been killed and 4,000 wounded since the assault began in early April, while nearly 100,000 have been displaced, according to UN agencies.

Late Wednesday flights were suspended at Mitiga, Tripoli's only functioning airport, a statement by airport authorities said, after Haftar's forces launched an air strike on the facility.

A security source said the raid caused no casualties or damage.

LNA spokesman Mesmari said a "drone command centre" at Mitiga was destroyed in the raid.