Voters formed long lines at many polling stations waiting for the chance to cast ballots in the tightly contested race for the presidency. 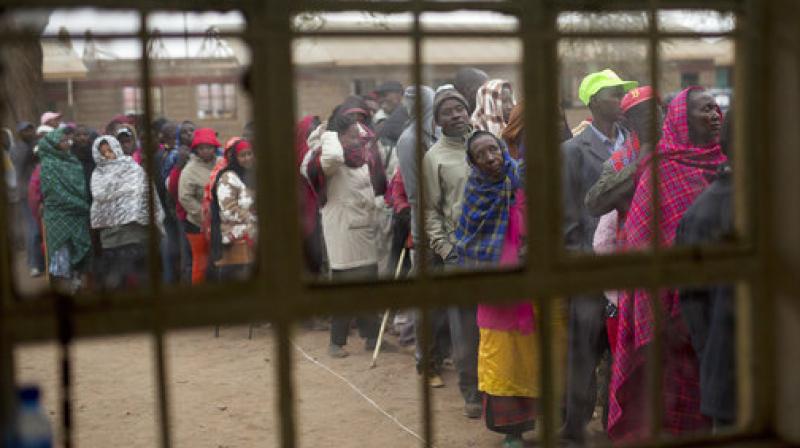 Kenyans line up to vote in Bissil, 120 kms. (75 miles) south of Nairobi, Kenya. Kenyans are going to the polls to vote in a general election after a tightly-fought presidential race between incumbent President Uhuru Kenyatta and main opposition leader Raila Odinga. (Photo: AP)

Nairobi: Kenyans on Tuesday voted in an election that pits President Uhuru Kenyatta against challenger Raila Odinga in this East African economic hub known for its relative, long-term stability as well as the ethnic allegiances that shadow its democracy.

Voters formed long lines at many polling stations before dawn, waiting for the chance to cast ballots in the tightly contested race for the presidency as well as for more than 1,800 elected positions, including governors, legislative representatives and county officials.

A key concern was whether Kenya would echo its 2013 election, a mostly peaceful affair despite opposition allegations of vote-tampering, or the 2007 election, which led to violence fueled by ethnic divisions that killed more than 1,000 people.

"This is a positive feedback for us," polling official James Njaya said of the high turnout in Kibera, a poor area in Nairobi, the Kenyan capital.

More than 300 people, including ethnic Maasai draped in traditional red blankets, waited for hours in the dark before polling station opened in the Rift Valley town of Il Bissil. Kenyan television also showed long lines of voters in the port city of Mombasa.

Reaction to the result could partly depend on the performance of Kenya's electoral commission, which will collect vote counts from more than 40,000 polling stations. Fears of violence were increased by the murder of an electoral official in charge of technology days ahead of the election.

The election commission has said that about 25 percent of polling stations won't have network coverage, meaning officials will have to move to find a better signal and transmit results by satellite telephones. Kenya has nearly 20 million registered voters.

Former US Secretary of State John Kerry is among thousands of observers who are monitoring the election, in which many voters are expected to vote along ethnic lines.

President Kenyatta is widely seen as the candidate of the Kikuyu people, the country's largest ethnic group. Odinga is associated with the ethnic Luo voting bloc, which has never produced a head of state.

In a speech late Monday, President Kenyatta appealed to Kenyans to vote peacefully in large numbers.

"How you have voted should not in any way reflect or change the manner in which you have related to your neighbor," Kenyatta said. "Shake their hand, share a meal and tell them, 'Let us wait for the results,' for Kenya will be here long after this general election."