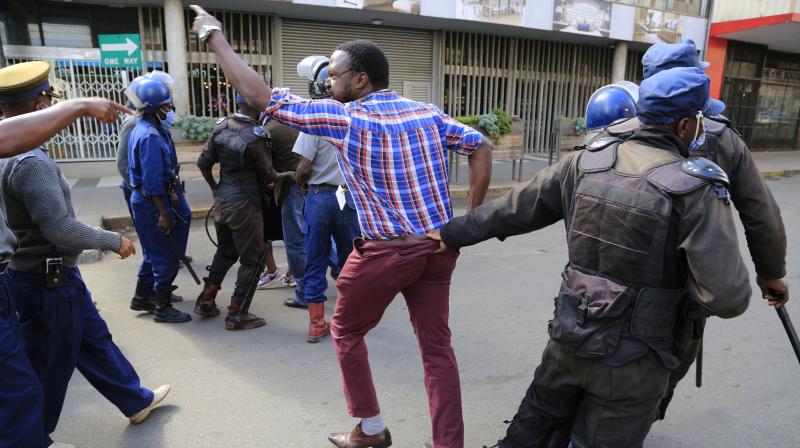 Harare: Zimbabwe’s National Security Council (NSC) in a maiden news conference on Wednesday accused allies of the late former leader Robert Mugabe and some opposition officials of peddling rumours of an impending military coup and said the country was stable.

Zimbabwe’s worst economic crisis in more than a decade and rising public anger have stoked concern the military, which ended Mugabe’s more than three-decades rule in November 2017, might step in again.

Giving its first news conference since being formed in 2013, the NSC said speculation was intensifying that Mugabe allies living in exile were plotting a comeback with the help of elements in the military and the opposition.

The NSC is chaired by President Emmerson Mnangagwa and its members include security ministers and military chiefs, who were present at Wednesday’s media briefing.

“For the avoidance of doubt, there is no coup in the making,” Kazembe Kazembe, the home affairs minister in charge of the police and an NSC member, told reporters.

“We would like to take this opportunity and assure the nation and international community at large that Zimbabwe ... is peaceful and stable internally.”

The 2018 elections were supposed to end Zimbabwe’s pariah status with the West, but Mnangagwa’s government has been accused of resorting to Mugabe-era tactics of heavy handedness against opponents.

The main opposition accuses the government of using a coronavirus lockdown to erode political rights.

Kazembe said the authorities would tackle those spreading a “medley of falsehoods”.

Without naming them, he accused some foreign embassies in Harare of misleading their capitals on affairs in Zimbabwe and relying on the opposition and former ruling party officials in their intelligence gathering.

“They also have, in the process, brazenly jettisoned any semblance of diplomatic impartiality and finesse in blatant violation of the peremptory norms of international law,” Kazembe said.