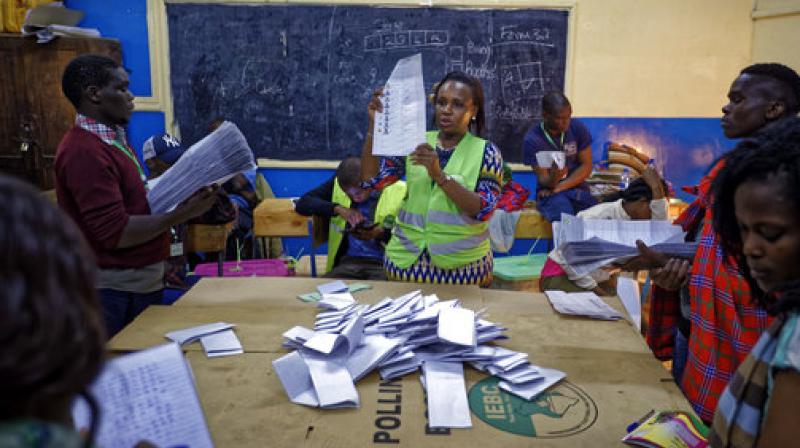 An electoral counting officer, center, counts votes while others hold the piles of ballots counted for each candidate, at a polling station in Nairobi, Kenya. (Photo: File/ AP)

Nairobi: Kenya's election commission was preparing to release final results Friday from a hotly-contested vote in which the opposition has already claimed victory, fanning tensions in the east African nation.

The National Super Alliance (NASA) opposition coalition on Thursday demanded that its candidate Raila Odinga be declared president, claiming massive fraud was behind preliminary results that placed him far behind incumbent Uhuru Kenyatta.

Foreign observers praised a peaceful, credible voting process, but the mood quickly turned sour when Odinga rejected the results after only a few hours of counting. Odinga first complained the electronically transmitted results were not being backed up by the required forms. He later unveiled details of an alleged hacking attack to manipulate results.

NASA then doubled down with a claim the election commission (IEBC) was concealing results contained on its server that, it said, showed Odinga to be the winner. "We demand that the IEBC chairperson announce the presidential election results forthwith and declare Raila Amolo Odinga as the duly elected president," said one of NASA's leaders, Musalia Mudavadi.

The charge ratcheted up tensions that have seen Kenya on a go-slow since voting day on Tuesday, with many businesses shut, civil servants staying at home and streets largely empty. The final results may be released in the afternoon.

"Any attempts to pressurise the IEBC, as being witnessed, are irregular, and may stoke the flames in an already tense situation. We have said before, and reiterate, that any candidate with grievances pursue established avenues of redress," the Daily Nation said in an editorial. "This process (of determining final results) is still ongoing, and so there are no election results on which to file a petition."

But memories are still raw of a disputed poll that led to two months of ethno-political violence in 2007-8, leaving 1,100 dead and displacing 600,000.

While veteran opposition leader Odinga, 72, also claimed 2013 polls were stolen from him, he took his grievances to the courts and ended up accepting his loss.

"We do not want to see any violence in Kenya. We know the consequences of what happened in 2008 and we don't want to see a repeat of that," Odinga told CNN in an interview. But he repeated his assertion that "I don't control anybody. People want to see justice."

Kenyatta looked set for certain victory, with 8 million votes to Odinga's 6.7 million, according to the IEBC public website whose results are being cross-checked against polling forms from constituencies.

However, NASA provided documents purportedly obtained from IEBC servers via a "confidential source" showing that Odinga had 8.04 million votes, leading Kenyatta on 7.75 million.

We need peace: IEBC chief Wafula Chebukati responded to the NASA claims, detailing that their "evidence" was riddled with arithmetical errors and came from a Microsoft database, while the electoral commission's system was running on Oracle.

In the Kondele neighbourhood of the western city of Kisumu where protests erupted on Wednesday hundreds of Odinga supporters took to the streets, banging drums and blowing vuvuzelas after his party declared him the winner. "We are happy," said 35-year-old Anthony Karaba, as a police helicopter hovered overhead. "We need peace and we need the correct results."

The IEBC insists its electronic voting system seen as key to avoiding fraud was not compromised. Britain and the US joined foreign observer missions in urging party leaders to be patient and refrain from inflaming tensions ahead of the release of final results.

Former US secretary of state John Kerry, leading an observer team from the Carter Center, expressed confidence in the IEBC. "We believe the IEBC put in place a detailed, transparent process of voting, counting, reporting and securing the vote, all of which lends significant credibility and accountability," Kerry told journalists.

Before the election the race between Odinga and Kenyatta was seen as too close to call. It was billed as the final showdown between the two men whose fathers Jomo Kenyatta and Jaramogi Odinga were allies in the struggle for independence, but later became bitter rivals, setting the stage for decades of political rancour.

Kenyatta, 55, is seeking re-election after a first term in which he and his Jubilee Party were credited with a massive infrastructure drive and overseeing steady economic growth.

Odinga describes himself as a social democrat who wants to fight inequality.