Pulling down statues of racists? Africa’s done it for years

To be fair, new campaigns in the USA and Europe are now following Africa’s lead 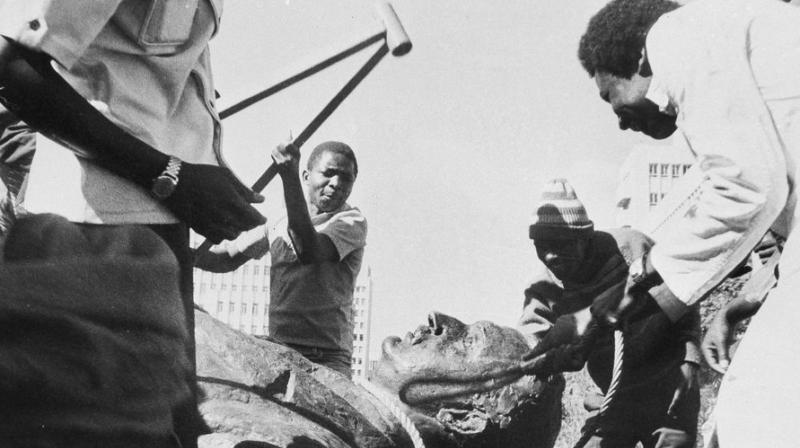 In this July 31, 1980, file photo, Rhodesians beat a statue as they celebrate the removal of Rhodesia's founder, Cecil Rhodes, after Rhodesia, became independent in April, ending nine decades of British colonial rule and becoming Zimbabwe. (AP)

Johannesburg: Queen Victoria, Cecil Rhodes, King Leopold. Statues honoring these leaders of colonial rule have been pulled down over the years in Africa after countries won independence or newer generations said racist relics had to go.

New campaigns in the U.S. and Europe are now following Africa’s lead. Monuments to slave traders and colonial rulers have become the focus of protests around the world, driven by a reexamination of historical injustice after the death of George Floyd at the hands of police in the U.S.

No protests have been spotted this week around the remaining statues in Africa, but several have faced furious demonstrations in the past.

A boisterous student-led campaign pressed the University of Cape Town to remove a statue of Cecil Rhodes from the school’s entrance in April 2015. The statue had been defaced and covered in excrement by students protesting against the colonial leader who supported white minority rule in South Africa and the colonization of the southern African territories named for him, Northern and Southern Rhodesia, which later became independent Zambia and Zimbabwe.

Students celebrated as a crane lifted the statue off its base. Now the statue is covered by a tarpaulin at a local army base.

Another statue of Rhodes was toppled in Zimbabwe in July 1980, a few months after the country became independent. When the statue was downed in the capital — then known by its colonial name, Salisbury, now Harare — demonstrators cheered and pounded it with a hammer.

A statue of Britain’s Queen Victoria in Nairobi, Kenya, was knocked down and beheaded in 2015 by unknown vandals. The headless statue lies next to its plinth in a downtown square.

“This statue reminds me of the suffering our forefathers went through in the hands of colonialists and whenever we see them, the memories are fresh,” Nairobi resident Samuel Obiero said. “We need to get rid of them. All over the world they must be brought down and all people who suffered due to colonialism need to also be saved from all these kinds of memories.”

In Congo, a statue honoring colonial ruler King Leopold II of Belgium — a copy of the statue that is now the focus of demonstrations in Belgium — was pulled down decades ago. Erected in 1928, it was ordered taken down by then-dictator Mobutu Sese Seko seven years after independence in 1960.

The statue made a return in 2005 with an updated plaque, intended by authorities to serve as a reminder of the horrors of colonial rule. Public outcry was so great that it was taken down a day later.

Now it stands in a park of colonial monuments set up on the grounds of the Institute of National Museums set up by the U.N. mission in Congo. Although the park is technically open to the public, access is limited because of its proximity to the president’s residence in the capital, Kinshasa. The park also has statues of explorers Henry Morton Stanley and David Livingstone.

There have been so many protests against the statue of Paul Kruger, an early white ruler of South Africa, in the capital, Pretoria, that fencing has been erected to keep people away from it. “Killer Killer” is prominently painted on its base.

“It just reminds me of, like, what’s written over there, ‘Killer Killer,’” said Rogue Wanga, a 19-year-old street vendor. “Those people were killers literally. And they never liked us. I feel like we should replace it. Maybe a fountain or a Madiba (Nelson Mandela) statue wouldn’t hurt.”

“I think maybe maybe we could put, like, a statue of someone else next to it. You know, maybe (black rights activist) Steve Biko next to the statue, maybe above it to show that we’ve gone past now,” Soxa said.

“But I don’t think we should necessarily take it down, ... because it’s a reminder of something that happened in the past and something we should avoid in future,” he said.

“It’s important for these symbols of injustice to be pulled down,” Gumede said. “This has been going on for decades, and we are grappling with ridding ourselves of these monuments to domination.”

African countries must find ways to celebrate their own heroes, “not just politicians but artists, social justice activists and many others,” said Gumede, who is also chairman of the Democracy Works Foundation, which promotes good governance in Africa.

“Pulling down statues of colonialist is not enough,” he said. “We must put forward positive representations of our history, representations that instill pride in our identity.”