Another #MeToo wave sweeps up Egypt amidst a pandemic

Sexual assault is deep-seated problems in Egypt, where victims must also fight a culture that ties female chastity to family reputation 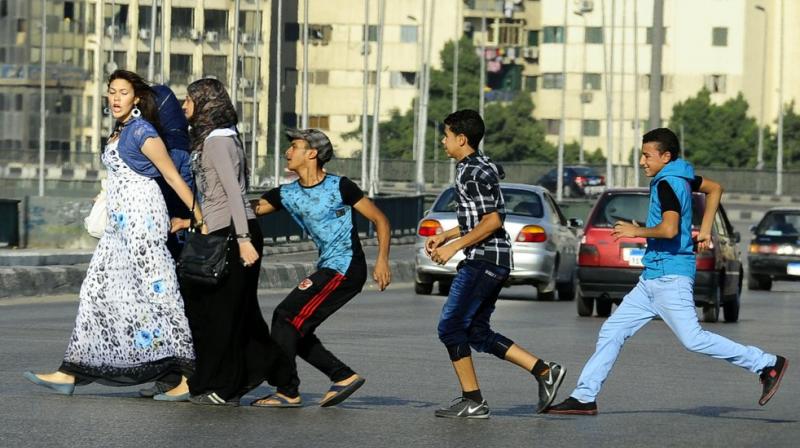 An Egyptian youth, trailed by his friends, gropes a woman crossing the street with her friends in Cairo, Egypt. (AP File Image)

Cairo: Their accounts are similar. The girls and women describe meeting the young man — a former student at Egypt’s most elite university — in person and online, followed by deceit, then escalating sexual harassment, assault, blackmail or rape.

Some were minors when the alleged crimes took place. In all, more than 100 accusers have emerged online in the past two weeks.

It’s resulted in a new #MeToo firestorm on social media, and the arrest of the suspect last week from his home in a gated community outside Cairo.

Activists say the case shows that misogyny cuts across the country’s stark class lines; many in Egypt have previously portrayed harassment as a problem of poor urban youth.

“What’s before this case is totally different from what’s after,” said Nihad Abuel-Komsan, head of the Egyptian Center for Women’s Rights and a lawyer representing some of the alleged victims.

Sexual assault and harassment are deep-seated problems in Egypt, where victims must also fight the undercurrent of a conservative culture that typically ties female chastity to a family’s reputation. In courts, the burden of proof lies heavily on the victim of such crimes.

In a statement, the public prosecutor’s officer said the accused man acknowledged he blackmailed at least six girls, saying he would send sensitive photos of them to their families if they cut ties. Several attempts by The Associated Press to contact him or his lawyer were unsuccessful.

Amr Adib, Egypt’s most prominent TV host, said in a recent episode that he’d spoken with the young man’s father, who occupies a high-ranking position at a telecommunication company. He said his son dismissed the allegations.

At least 10 women have officially reported their claims, according to Abuel-Komsan, of the women’s rights center. Activists also set up the Instagram account @assaultpolice to collect allegations, said Sabah Khodir, a U.S.-based writer who helps run the account. She said there are more than 100 accounts.

“We are demanding to be listened to … We are just using what we have, lending our voices to hopefully create some kind of change,” she said.

A court has ordered the accused to remain in custody pending an investigation into an array of accusations that include attempted rape, blackmail and indecent assault, according to a five-page statement by the public prosecutor. In the same statement, the prosecutor urged more alleged victims to come forward.

Last week, the government of President Abdel-Fattah el-Sissi moved to amend the country’s criminal law to increase protections for the identities of sexual assault victims, which activists have welcomed. The amendment still needs parliamentary approval and el-Sissi’s signature to be made law.

The allegations against the student cover a period of at least three years.

Many of the anonymous accounts appear to be from fellow students at the American International School, one of the country’s most expensive private high schools, and the American University in Cairo, which school officials said the accused left in 2018. It would appear that he then enrolled at the European Union Business School in Spain, in an online program last year.

In February, he spent three weeks at its Barcelona campus, but the school expelled him after an accusation of online harassment that was subsequently proved false, said Claire Basterfield, a spokesperson for the EUBS. The school has filed a 54-page criminal complaint with the Spanish police, seeking further investigation into his actions.

The head of the American University in Cairo, Francis Ricciardone, said the university has a zero tolerance policy concerning sexual harassment, but that he would not comment on an ongoing case.

According to accusations posted on social media in the past two weeks, the former student would mine the pool of mutual friends on Facebook, online groups or school clubs. He would start with flattery, then pressure the women and girls to share intimate photos that he later used to blackmail them to have sex with him. If they did not, he would threaten to send the pictures to their family.

In some cases, he “attracted their sympathy by claiming he was going through a crisis,” then lured them to his home in an upscale compound where he sexually assaulted them, the prosecutor’s statement alleged.

In Egypt, sexual assault complaints have typically involved street harassment. During and after the 2011 uprising that toppled President Hosni Mubarak, women were frequently harassed, groped — and in some cases, beaten and sexually assaulted — during mass protests.

This time, there are signs of wider ripples throughout the society. The current series of complaints has prompted Egypt’s Al-Azhar, the Sunni Muslim world’s foremost religious institution, to speak out on sexual harassment and assault, even challenging the widely held belief that a woman is at fault if her clothing is less than modest. It’s a departure from the norm for the conservative Muslim majority country where most women wear headscarves.

There are also other corners where accusations of sexual harassment are emerging, such as in civil society groups and businesses.

Two rights groups said they fired one employee and suspended another, and opened investigations after allegations of sexual misconduct against them were made public. Authorities also detained a prominent publisher over the weekend after a poet filed a complaint with the Cairo police, accusing him of sexually harassing her, the state-run al-Ahram reported. The publisher denied the allegations in a Facebook posting. He was released late Sunday on 5,000 Egyptian pounds ($313) in bail, pending an investigation.

The recent cases — reaching into the Egyptian elite — have “refuted all previous arguments and justifications for harassment, from poverty to illiteracy and things like that,” Abuel-Komsan said.