WHO estimates around 150 casualties in battle of Libya's Tripoli

At least 147 people have been killed and 614 wounded in the offensive launched by Libyan military strongman Khalifa Haftar. 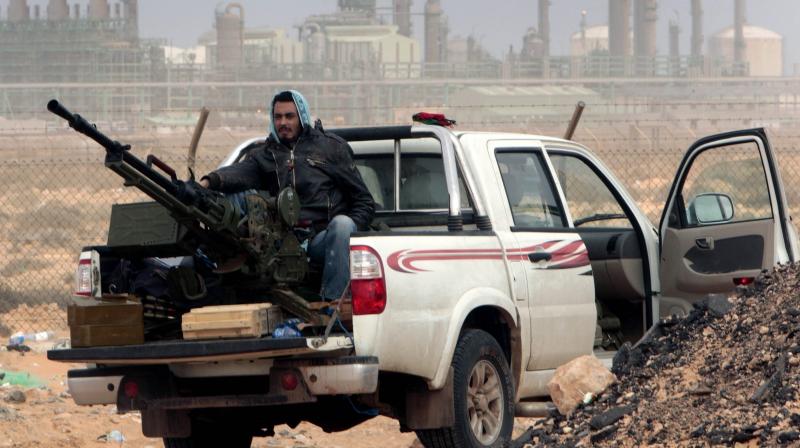 The clashes have displaced more than 18,000 people. (Photo:AP)

Tripoli: At least 147 people have been killed and 614 wounded in the offensive launched on April 4 by Libyan military strongman Khalifa Haftar to take the capital Tripoli, the World Health Organisation said Monday.

The clashes have displaced more than 18,000 people, according to the latest figures from the United Nations Office for the Coordination of Humanitarian Affairs. Fighting broke out as Haftar's forces sought to take control of Tripoli from loyalists of the internationally-backed Government of National Accord (GNA) which is based in the capital.

The rising number of casualties has prompted the World Health Organization to deploy surgical teams "to support Tripoli-area hospitals as they cope with the influx of trauma cases", the UN agency wrote on Twitter. At least eight ambulances have been hit during clashes in the southern outskirts of the capital, as both sides have defied international calls to halt the fighting.

WHO urged "all parties to exercise restraint and avoid causing collateral damage to hospitals, ambulances and health workers". In addition to ground fighting, both pro-government forces and Haftar's self-styled Libyan National Army (LNA) carry out daily air raids and accuse each other of targeting civilians.

The resulting casualties have left health facilities in "critical need of assistance", according to the United Nations refugee agency. "The situation on the ground continues deteriorating and number of casualties soaring," UNHCR tweeted.