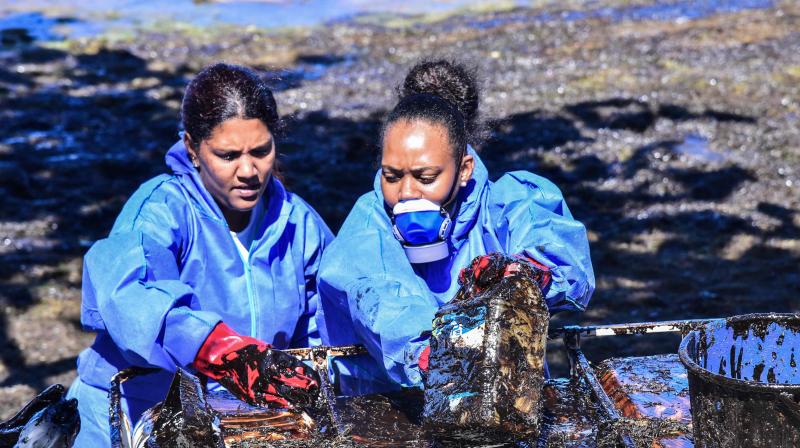 Volunteers collect leaked oil from the MV Wakashio bulk carrier that had run aground at the beach in Mahebourg, southeast Mauritius. (AFP)

Tokyo: The Japanese owner of a cargo ship that leaked massive amounts of oil after running aground off Mauritius has pledged to "sincerely" respond to requests for compensation over damage to the marine environment.

"We are deeply conscious of our responsibility as a party directly involved in the case," said Kiyoaki Nagashiki, president of Nagashiki Shipping, which owns the stricken bulk carrier.

"Regarding compensation, we plan to deal with the issue sincerely based on applicable laws," the head of the Okayama-based company said in a statement released Thursday.

"We will continue to do our utmost to collect the leaked oil and to minimise the impact of the environmental pollution," he added.

The vessel is at risk of breaking apart after leaking more than 1,000 tonnes of fuel into the sea, but Prime Minister Pravind Jugnauth on Wednesday said almost all the remaining fuel on the vessel had been pumped out from the carrier.

The "ecological crisis" was beyond the scope of the tiny Indian Ocean nation's capabilities, Jugnauth added, and he appealed for urgent international help.

France and Japan are among nations that have answered the call, along with thousands of ordinary Mauritians who volunteered day and night to clean sludge from the picturesque tropical coastline to which their economy is deeply tied.

Police have launched an investigation into the spill and have seized the ship's black box, log book and other items as part of their inquiries.