Millions of people died between 1996 and 2003 as conflict caused hunger and disease in the Democratic Republic of Congo. 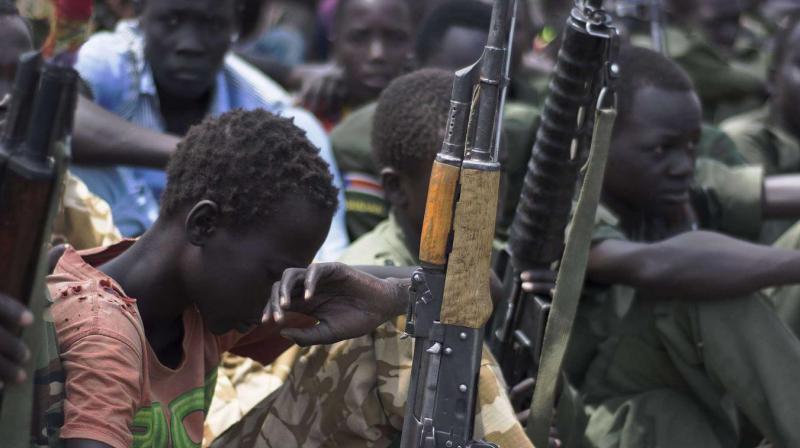 Coventry:  It was during an ordinary game of soccer when Michel Chikwanine was abducted at age five by rebel soldiers in the Democratic Republic of Congo and recruited into the army.

Herded onto a truck with his friend Kevin, Chikwanine was blindfolded, handed an AK-47 gun so heavy he could barely lift it and ordered to shoot.

"So I pulled the trigger," Chikwanine told a conference on conflict and migration issues on Tuesday, where activists, advocates and others met to discuss such issues as the estimated 250,000 child soldiers in the world today.

The eastern region of Mr Chikwanine's homeland has been plagued by dozens of armed groups that prey on locals and exploit mineral reserves. Millions of people died between 1996 and 2003 as conflict caused hunger and disease.

Chikwanine escaped and at age eleven made his way to Canada, where he lives and studies. He urged the international community to do more to stop the use of child soldiers.

"We talk about children's rights and we give them lip service, but we're not really fulfilling these goals," he said at the RISING Global Peace Forum conference.

Of the world's 250,000 child soldiers, about 40 per cent of recruits are girls, said British charity War Child.

Many girls in the eastern Congo join militia groups for food and money, for protection against violence or because their families cannot afford to pay school fees, according to the Britain-based Child Soldiers International.

Activists said that they are often married off to militants and vulnerable to abuse and rape.

Romeo Dallaire, Founder of the Canada-based Child Soldiers Initiative, said that the use of children in war has been increasing, especially in jihadist groups such as Islamic State and Boko Haram in Nigeria.

"In the past, certainly children have been used, but as a peripheral instrument or as a last resort," Mr Dallaire told the conference.

"We're actually moving into an era where the preferred instrument of conflict ... is using children to do the conflict," he said.

Dallaire, who worked for the United Nations during the 1994 Rwandan genocide, said the recruitment of children is a strong indication of other horrors being committed as well.

"If you're ready to recruit children to do your fighting, there is no limit to what you can make them do, and there's no limit to where you are prepared to go in regards to abusing human rights," he said.

"If you see significant recruitment of child soldiers in a conflict zone, it can rapidly degenerate into mass atrocities or genocide," he said.