Based on advance purchase agreements signed with Pfizer, it is calculated that 1.1 billion doses had been snapped up by wealthy nations 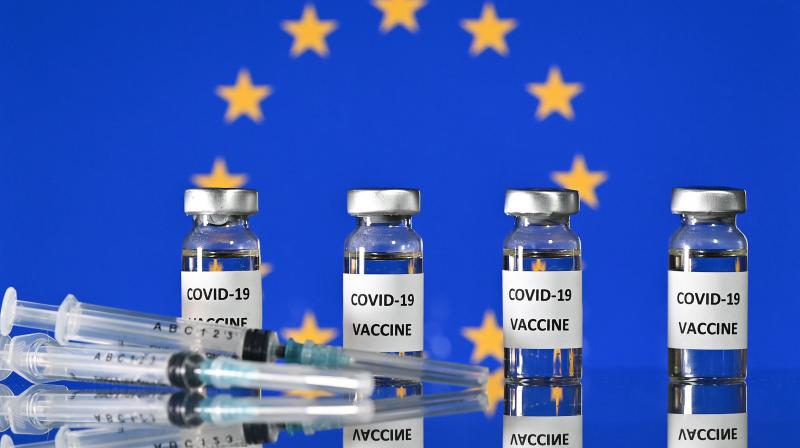 An illustration picture shows vials with Covid-19 Vaccine stickers attached, and syringes, with a flag of the European Union, on November 17, 2020. (AFP)

Paris: Hailed this week as a pandemic game-changer, the new Covid-19 vaccine offered countries that had pre-ordered doses a potential escape from a cycle of lockdowns and new waves of sickness and death.

But while richer nations plan their vaccination programmes through the end of 2021, experts warn that poorer and developing countries face hurdles that could deny billions the first proven protection against the coronavirus.

Vaccine developers Pfizer and BioNTech plan to roll out the first doses within weeks, once they receive emergency use permissions from drug agencies. They expect to have 1.3 billion doses ready next year.

The results of phase 3 clinical trials showed their mRNA vaccine was 90 percent effective in preventing Covid-19 symptoms and did not produce adverse side effects among thousands of volunteers.

At the cost of $40 per treatment, which consists of two separate shots, richer nations have rushed to order tens of millions of doses. But it is less clear what poorer nations can expect.

"If we only have the Pfizer vaccine and everyone needs two doses, clearly that's a difficult ethical dilemma," Trudie Lang, director of The Global Health Network at the University of Oxford's Nuffield Department of Medicine, told AFP.

Anticipating the outsize demand for any approved vaccine, the World Health Organization formed the COVAX facility in April to ensure equitable distribution.

COVAX brought together governments, scientists, civil society and the private sector -- though Pfizer is not currently part of the facility.

A company spokesperson told AFP it had "provided an expression of interest for possible supply" to COVAX.

Rachel Silverman, a policy fellow at the Center for Global Development, said it was unlikely that much of the first vaccine batch would end up in poorer nations.

Based on advance purchase agreements signed with Pfizer, she calculated that 1.1 billion doses had been snapped up entirely by wealthy nations.

"There's not much left for everyone else," she told AFP.

Some countries that pre-ordered, such as Japan and Britain, are part of COVAX, so some doses are likely to reach less developed nations through their purchase agreements.

Conversely, the United States, which has 600 million doses on order, is not a COVAX member, though this may change under a Joe Biden administration.

Benjamin Schreiber, Covid-19 vaccine coordinator at the UN's children's fund UNICEF, said it was vital that all nations had fair access to the new vaccine.

"We really need to avoid a situation of rich nations gobbling up all the vaccines and then there's not enough doses for the poorest nations," he said.

They modelled two scenarios. The first, the "uncooperative allocation" scenario, hypothesised what would happen if 50 rich nations monopolised the first 2 billion doses of a vaccine.

The second saw the vaccine distributed based on a country's population rather than its ability to pay for it.

Commenting on the study, the Gavi vaccine alliance, which co-leads COVAX, said "the modest gain for high-income countries in monopolising vaccines was far less than the devastating losses for low-income countries if countries don't cooperate".

Even if finance for poorer nations materialises, the logistics of getting the new vaccine to everyone remains dizzying.

Pfizer's vaccine is based on mRNA, which tricks the immune system to produce viral proteins itself that are then neutralised.

It appears to be effective at bestowing protection against Covid-19, yet is extremely fragile: it must be stored at -80 degrees Celsius (-112 degrees Fahrenheit) or else it falls apart.

"Most freezers in most hospitals anywhere in the world are -20C," said Lang. "This is four times colder."

Silverman said maintaining the vaccine's "ultra-cold chain" from factory to patients' arms constituted "an enormous logistical challenge even in the West".

Although Pfizer and some governments have been preparing delivery protocols for months in anticipation of trial results, "none of that has taken place in low- and middle-income countries", she said.

Pfizer has designed its own "thermal shipper", a briefcase-sized container that can keep the vaccine supercool for up to 10 days.

For others, there may be ways around the problem. Food storage containers, for example, are regularly cooled to close to the temperature required by the vaccine before being shipped long distances.

And the Ebola vaccine, which like those in trial for Covid-19 was developed and delivered at warp speed following a string of deadly outbreaks, has a similar temperature profile to Pfizer's.

"We have experience in rolling out the Ebola vaccine in some countries," Schreiber told AFP.

He said it was "more difficult but not impossible" to safely store and administer the Covid-19 vaccine across the global south, but this would require significant investment and training.

There are currently more than three dozen other Covid-19 vaccine candidates in development, 11 of which are in or have completed phase 3 trials.

Most experts agree that the best route out of the pandemic would be to have several safe and effective vaccines that work in different ways, giving varying levels of protection.

Pfizer has yet to release its full results so it is not clear if its vaccine stops Covid-19 transmission -- meaning it would be suitable for mass administration -- or if it only prevents severe illness, in which case it would be prioritised for elderly and at-risk populations.

But even if several vaccines come online in the coming months, there is no guarantee everyone who should get one will agree to it.

The WHO in 2019 said "vaccine hesitancy" was one of the top 10 global health threats, and last month The Lancet medical journal warned that growing anti-vaccine movements could hamper the Covid-19 inoculation rollout.

Although the Ebola vaccination programme has all but eradicated the virus, several studies showed how progress was slowed by mistrust and misinformation circulating both online and within communities.

Lang said there were also lessons to learn from the polio response in Africa.

"Africa is now clear of polio, which is amazing," she said. "But the things we had to get over in order to do that.

"Mothers would often say: 'If I go to the hospital with my son I can't get medicines or treatment, but you're going over to my house with this foreign vaccine. What's that about?'

"It's a tall order to gain trust."