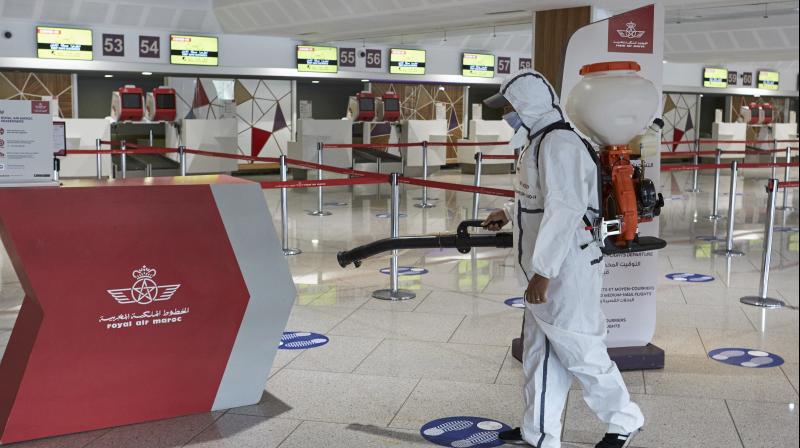 Employee wearing masks as he disinfect to avoid contamination with the COVID-19 virus at the Mohammed V airport in Casablanca, Morocco. (AP)

Rabat: Morocco reported on Friday its highest number of confirmed novel coronavirus infections in a single day since recording its first case in March, according to the health ministry.

Over 450 of the infections were recorded in the western Rabat-Kenitra region, the health ministry said, noting the cases were "asymptomatic".

Local media reported the source of the outbreak was a strawberry packing plant in the town of Kenitra.

Morocco, with a population of 34 million, has until now recorded on average fewer than 100 new COVID-19 cases daily.

In total, it has reported fewer than 10,000 cases and 213 deaths from the respiratory illness.

The spike comes as the country prepares to relax restrictions aimed at containing the virus on Saturday.

On June 9, authorities announced a gradual lifting of lockdown measures, though restrictions remain in force in major cities and a public health state of emergency has been extended until July 10.

Meanwhile, a massive screening campaign for private sector workers has been launched after authorities urged companies to resume working.