Tahrir Square was the epicentre of 2011 revolution that toppled Egypt’s long-time autocratic leader. 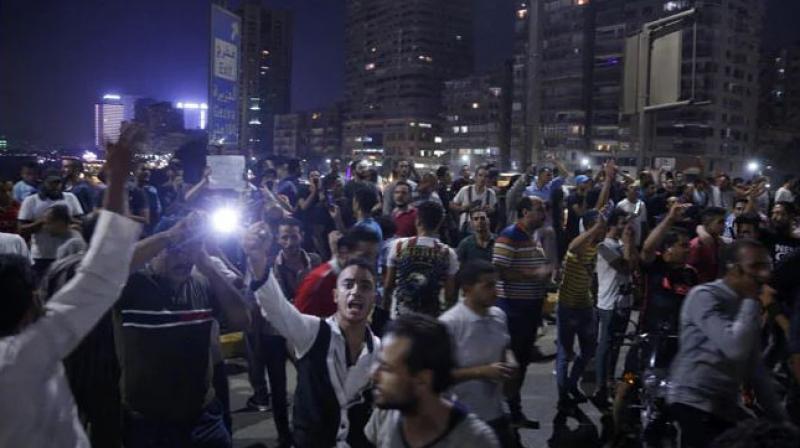 Under the rule of general-turned-president Sisi, who led Morsi's ouster, authorities have launched a broad crackdown on dissidents, jailing thousands of Islamists as well as secular activists and popular bloggers. (Photo: AFP)

Cairo: Rare small protests broke out on Friday in Cairo and other Egyptian cities calling for the removal of President Abdel Fattah al-Sisi but police quickly dispersed them, AFP reported.

Dozens of people joined night-time demonstrations around Tahrir Square -- the epicentre of the 2011 revolution that toppled the country's long-time autocratic leader.

Such demonstrations are rare after Egypt effectively banned protests under a law passed following the 2013 military ouster of Islamist ex-president Mohamed Morsi.

Amid a heavy security presence, including riot police and plainclothes police officers, protesters were rounded up.

AFP journalists saw at least five protesters being arrested and police firing tear gas at demonstrators around the square.

Under the rule of general-turned-president Sisi, who led Morsi's ouster, authorities have launched a broad crackdown on dissidents, jailing thousands of Islamists as well as secular activists and popular bloggers.

Footage of the demonstrations, in which dozens chant "Leave Sisi", was shared online using the hashtag #Tahrir_Square, which was trending worldwide.

Along the road overlooking the Nile, close to the square, AFP journalists reported seeing small groups of people chanting anti-Sisi slogans after the rapid dispersal.

The protests come on the back of Mohamed Ali, a disgruntled exiled Egyptian businessman, demanding the toppling of Sisi.

The construction contractor has been posting viral videos from Spain since the beginning of September accusing Sisi and the military of rampant corruption.

Sisi flatly denied the allegations last week at a youth conference assuring Egyptians he "was honest and faithful" to his people and the military.

In his latest video posted early Friday morning on his growing social media accounts, Ali urged Egyptians to head to the streets after a highly anticipated football match between Cairo powerhouses Al Ahly and Zamalek in the Super Cup.