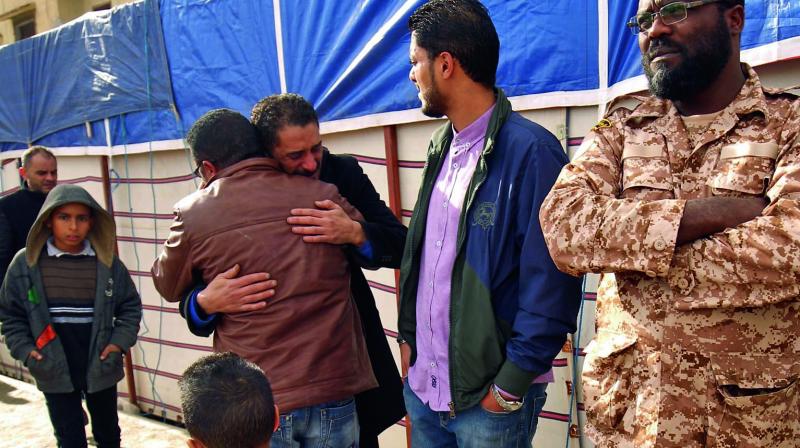 Mourners embrace each other after the explosion in the eastern city of Benghazi on Wednesday. The death toll following a double car bomb attack in the Libyan city of Benghazi night rose to at least 34, a hospital spokeswoman said. (Photo: AFP)

Benghazi, Libya: Around 34 people were dead and dozens wounded after two car bombings outside a mosque frequented by jihadist opponents in Libya’s second city Benghazi, medical officials said on Wednesday.

The attack after evening prayers on Tuesday underlined the continued chaos in Libya, which has been wracked by violence and divisions since dictator Moamer Kadhafi was toppled and killed in a 2011 Nato-backed uprising.

Benghazi has been relatively calm since military strongman Khalifa Haftar announced the eastern city’s “liberation” from jihadists in July last year after a three-year campaign, but sporadic violence has continued.

The bombers blew up two cars 30 minutes apart outside the mosque in the central neighbourhood of Al-Sleimani, according to security officials.

Emergency and security workers who had rushed to the scene were among those killed in the second blast.

There was no immediate claim of responsibility but the mosque is known to be a base for Salafist groups which fought the jihadists alongside Haftar’s forces.

Medical officials said many of the wounded were in critical condition and the death toll was likely to rise.

Haftar supports an administration based in the east of the country. It declared three days of mourning following the attack.

A UN-backed unity government based in the capital Tripoli, the Government of National Accord (GNA), has struggled to assert its authority outside the west.

The GNA condemned the attack as a “terrorist and cowardly act”.

The UN Support Mission in Libya (UNSMIL) denounced the bombings as “horrific” and warned that “direct or indiscriminate attacks against civilians... constitute war crimes”.

UN efforts to reconcile the rival administrations have produced no concrete result.

Haftar said in late December he would support elections in 2018 to bring the country out of chaos, but suggested he could take measures if efforts for “a peaceful power transition via free and democratic elections were exhausted”.

Haftar’s opponents accuse him of wanting to seize power and establish a military dictatorship, while his supporters have called for him to take control by “popular mandate”.

UN envoy Ghassan Salame presented a plan to the Security Council in September to hold parliamentary and presidential elections this year, but analysts are sceptical they will take place.

Clashes between rival militias are common, with fighting at Tripoli’s airport last week leaving 20 dead and forcing the cancellation of all flights for five days.

The turmoil has stifled efforts to restore oil-rich Libya’s economy and made the country fertile ground for extremists.

The Islamic State group has a significant presence and was in control of coastal city Sirte from late 2014 to late 2016, when the jihadists were pushed out by pro-GNA forces.

People-smugglers have also taken advantage of the chaos to turn the country into a major gateway for migrants heading to Europe.