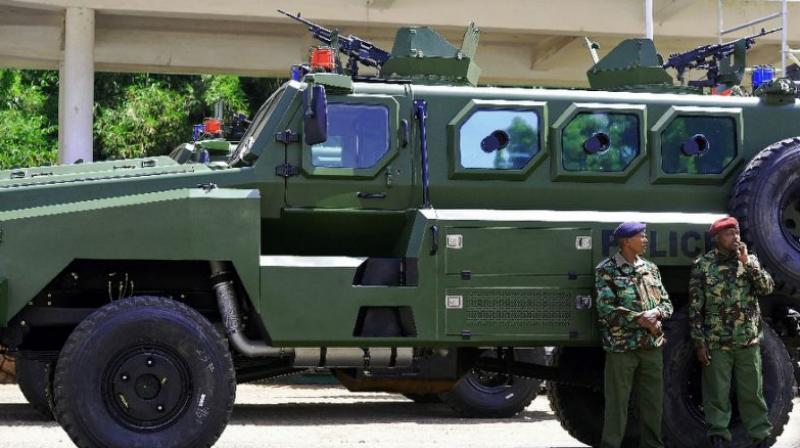 Kenyan police have warned of increased Islamist activity in the restive northeast, close to the border with Somalia (Photo: AFP)

Nairobi: Five police officers were killed Thursday when their vehicle hit a roadside bomb in Kenya in an attack claimed by Shabaab Islamists a day after eight police died in similar blasts.

The officers had been deployed to the restive northeastern region to take part in an operation against the Somali-led militants after two separate roadside bombs on Wednesday.

"The five police officers killed in the attack were headed to boost the ongoing operation in Liboi," said North Eastern regional coordinator Mohamud Ali Saleh referring to a town on the border with Somalia.

The Kenya Red Cross said the latest attack occurred between Malelei and Kulan in Garissa county when a vehicle hit an improvised explosive device (IED).

The Shabaab, a Somali-led Al-Qaeda-linked jihadist group, claimed the attack -- as well as the previous two -- in a statement carried by the SITE Intelligence Group.

On Wednesday morning three police officers were killed when their vehicle drove over a roadside bomb near the Liboi border post.

Later in the day a convoy accompanying a local governor was struck, killing five officers including his bodyguard.

Earlier this week Kenyan police issued a statement warning of increased militant activity in the area, specifically mentioning the threat of IEDs.

According to Tuesday's statement by police chief George Kinoti, the Shabaab was "under serious pressure in Somalia" and as a result "has split into small groups, some of whom are heading towards our border with the intention of staging attacks."

Kinoti said such groups planned "to lay IEDs along the routes used by our security patrols".

Despite predicting the spate of bombings that followed, Kenyan security was unable to prevent the deaths of 13 officers in two bloody days.

The government has yet to comment on the upsurge in attacks in the region bordering Somalia.

On May 16, four people were killed near Liboi when their car hit an IED.

In October 2016, the government imposed a dusk-to-dawn curfew in Mandera after Shabaab fighters killed 12 people at a hotel. The authorities also stepped up security in the region, with the curfew extended in April.

Since 2007, the Shabaab has fought to overthrow successive internationally-backed governments in Somalia but began attacking Kenya in 2011 after Nairobi ordered its troops into Somalia to fight the militants.

In 2013, Shabaab gunmen raided a shopping mall in the capital Nairobi killing 67 people, and in 2015 a similar attack on a university in Garissa left 148 dead.