Who hasn't heard of COVID-19 by now? More than you think 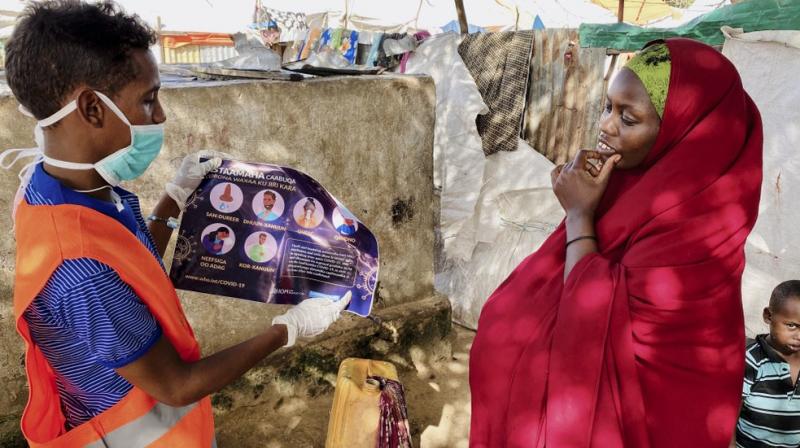 In this photo taken Wednesday, June 10, 2020, an internally-displaced Somali woman, right, is informed how to protect herself from the coronavirus, at the Weydow IDP camp in Mogadishu, Somalia. (AP)

Johannesburg: A half-year into the most momentous pandemic in decades, it’s hard to imagine that anyone, anywhere has not heard of the coronavirus. But scores of migrants arriving in Somalia tell United Nations workers every day that they are unaware of COVID-19.

Monitors for the U.N. migration agency interview people at the border in Somalia, a crossroads on one of the world’s most dangerous migration routes: across the Red Sea with traffickers, through war-ravaged Yemen and into rich Gulf countries.

The questions for migrants are simple. Origin? Destination? Why are you going? But after the first infections were confirmed in Somalia, a new one was added: How many people in your group are aware of the coronavirus?

“The first time I saw this I was also very shocked,” Celeste Sanchez Bean, a program manager with the U.N. agency based in Somalia’s capital, Mogadishu, told The Associated Press.

The findings, little more than a line in the agency’s reports, are a reminder of the huge challenges in reaching everyone in the world with information about the pandemic, much less getting them to wear face masks.

The migrants are often young men from rural parts of neighbouring Ethiopia. Most have no education, and some are from communities where internet access is low, Bean said. She doubted that anything had been lost in translation.

“We’ve been interviewing migrants for many years,” she said.

In past interviews, many migrants were not even aware that a war was being waged in Yemen, the next step on their journey, she said.

With that in mind, “I’m not super shocked that levels of awareness of the coronavirus are still very low.”

Instead, she’s heartened that the number of those unaware of COVID-19 has been dropping over the dozen weeks that the question has been asked, down from 88% at the start.

Anyone who is unaware of the coronavirus is given a short explanation of the pandemic, including how the virus is contracted and descriptions of the symptoms and preventative measures.

What worries Bean now are the findings of a new project mapping the migrant route through Somalia, a country destabilized by decades of conflict, and merging it with epidemiological data showing coronavirus infections.

“It’s very clear to us that migrants are transiting areas with confirmed cases,” she said. “When you have migrants with such levels of unawareness, combined with this ... I don’t want to say dangerous, but the migrants are putting themselves at risk.”

Possibly others, too. Migrants already face stigma in cities like Bosaso, where boats set off for Yemen, as some residents blame them for bringing the virus, the U.N. migration agency has said.

Now with the pandemic hurting the local economy, many migrants cannot find the work that allows them to save money for their onward journey, Bean said. “So they are struggling even more than ever before.”

Lack of awareness about COVID-19 isn’t limited to the migrants.

“I’ve heard of something that sounds like that name, but we don’t have it here,” Fatima Moalin, a resident of Sakow town in southern Somalia, told the AP when reached by phone. ”Muslims don’t contract such a thing.”

Others in rural Somalia, especially in areas held by the al-Qaida-linked al-Shabab extremist group, have been dismissive of the virus. Somali authorities cite limited internet access, limited awareness campaigns and even extremists’ restrictions on communications with the outside world.

A recent assessment by the U.N. migration agency of displaced people in Somalia’s breakaway region of Somaliland found “very high” levels of misunderstanding, with some people confusing COVID-19 with a mosquito-borne disease or thinking a key symptom of the respiratory disease was diarrhea.

But most respondents were aware of the pandemic, thanks largely to radio broadcasts, word of mouth and messages played by mobile phone services while waiting for someone to pick up — a common approach in many countries in Africa.

“Slowly, slowly the information is getting there,” Bean said.

The virus is, too. Somalia, with one of the world’s weakest health systems, now has more than 2,800 cases.