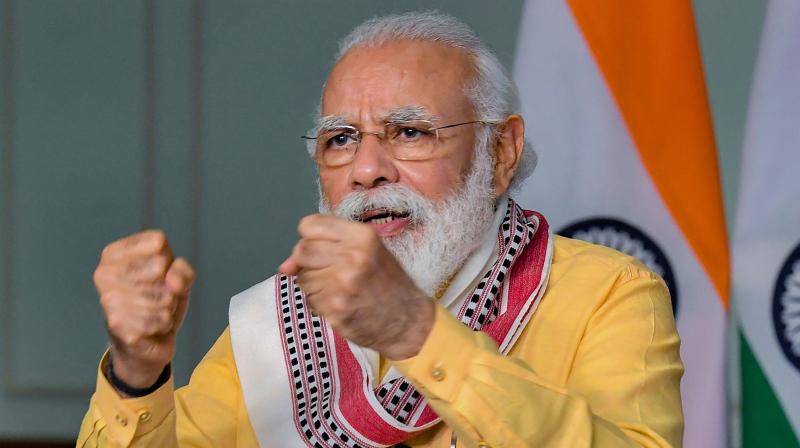 New Delhi: India's development cooperation with other nations does not come with any conditions and is not influenced by political or commercial considerations, Prime Minister Narendra Modi asserted on Thursday.

He also said that India's approach to development is mainly human-centric and it wants to work for the welfare of humanity.

The prime minister was addressing a virtual event of the inauguration of a new Supreme Court building of Mauritius.

"The new building in Port Louis is a symbol of our cooperation and shared values," Modi said.

"Both India and Mauritius respect our independent judiciaries as important pillars of our democratic systems," the prime minister observed.

Modi said history has taught us that in the name of development partnerships, nations were forced into "dependence partnerships".

"India is making development partnerships that are marked by respect, diversity, care for the future, and sustainable development," he noted.

"For India," Modi said, "the most fundamental principle in development cooperation is respecting its partners."

"This sharing of development lessons is our only motivation.That is why our development cooperation does not come with any conditions. It is not influenced by political or commercial considerations," the prime minister asserted.

Modi observed that Mahatma Gandhi had said, "My patriotism includes the good of mankind in general. Therefore, my service to India includes the service of humanity."

"India's development partnerships are diverse," he said adding that "from commerce to culture, energy to engineering, health to housing, IT to infrastructure, sports to science, India is working with nations across the globe."

"If India is honoured to help in the parliament building in Afghanistan, it is also proud to be associated with the making of the Mahatma Gandhi convention centre in Niger," he said.

Modi said New Delhi has been happy to help Nepal improve its health services through the construction of an emergency and trauma hospital.

"And we were similarly privileged to support Sri Lanka's efforts to establish emergency ambulance services in all nine provinces," he said.

"India is glad that the oil pipeline project it is doing with Nepal will help ensure the availability of petroleum products," he said.

Last month, Nepal completed the process to update the country's political map by incorporating three strategically important Indian areas by amending the Constitution. India has termed as "untenable" the "artificial enlargement" of the territorial claims by Nepal.

Modi said India is contributing towards ensuring the availability of drinking water and sanitation in 34 islands of the Maldives.

"We have tried to make cricket popular in countries as diverse as Afghanistan and Guyana by helping build  stadiums and other facilities.

"We are excited to see the young Afghan cricket  team trained in India emerge as a force to reckon with," he said.

India is now providing similar support to develop the talent of the Maldives cricket players.

He also pointed out that India is at the forefront of a major housing project in Sri Lanka.

"India is not only proud to be helping your present. We consider it our privilege to help you create a better future for your youth. That is why training and skilling is such an important part of our development cooperation," he said.

With Mauritius, India shares not only the waters of the Indian Ocean but also a common heritage of kinship, culture, and language, the prime minister said.

In his address, Prime Minister Jugnauth expressed appreciation for India's support for the project as reflective of the close ties of friendship and cooperation between the two countries.

He noted that the construction of the Supreme Court Building with Indian assistance is a new milestone in the modernisation of infrastructure in Mauritius and will help make the Mauritius justice system more efficient, accessible and inclusive.

In his address, peppered with sentences in Hindi, he also thanked India for the assistance rendered amid the COVID-19 pandemic.

According to an MEA statement issued on Tuesday, the new SC building is spread over an area of more than 4700 sqm with over 10 floors and a built-up area of around 25,000 sqm. The building flaunts a modern design and green features with a focus on thermal and sound insulation and high energy efficiency.

The new Supreme Court building project is one of the five projects being implemented under the Special Economic Package of USD 353 million extended by India to Mauritius in 2016.