Libya is the main departure point for African migrants trying to cross to Europe. 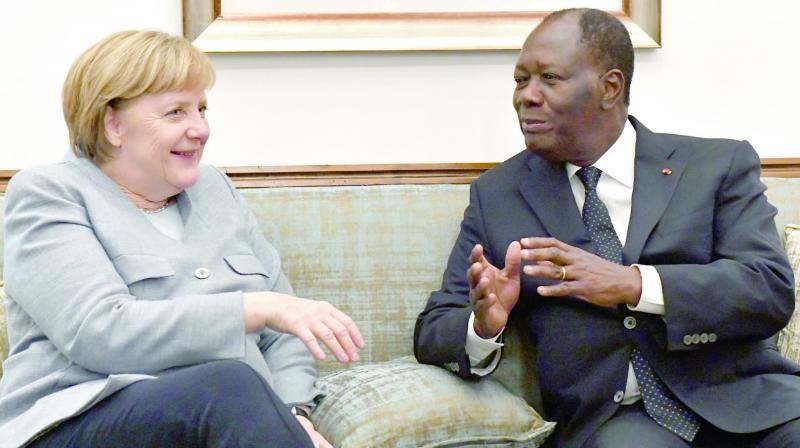 Ivorian President Alassane Ouattara, speaks with German chancellor Angela Merkel upon her arrival at the Felix Houphouet-Boigny airport in Abidjan on Wednesday, ahead of the Afican Union-European Union summit. (Photo: AFP)

Abidjan: German chancellor Angela Merkel on Wednesday stressed the importance of ending smuggling and slavery while creating a legal route for Africans to come to Europe as she faces pressure at home to tackle a migrant influx.

Speaking at an EU-Africa summit in Abidjan, Merkel, is seeking to show Germany can take foreign policy action despite still being under a caretaker government two months after an election.

The influx of more than a million migrants since mid-2015, many of them fleeing the Middle East and Africa, was largely to blame for the rise of the anti-immigrant alterna-tive for Germany (AfD) in a Sept. 24 election.

By taking votes from Ms Merkel’s conservative bloc and others, they surged into parliament for the first time, leaving Merkel facing complicated coalition arithmetic.

She is grappling to form a new government with the center-left Social Democrats after discussions on forming a three-way tie-up with the liberals and Greens failed.

On the issue of illegal immigration, Ms Merkel said: “This plays a role all over the African continent now because there are reports that young African men are being sold like slaves in Libya.”

Libya is the main departure point for African migrants trying to cross to Europe.