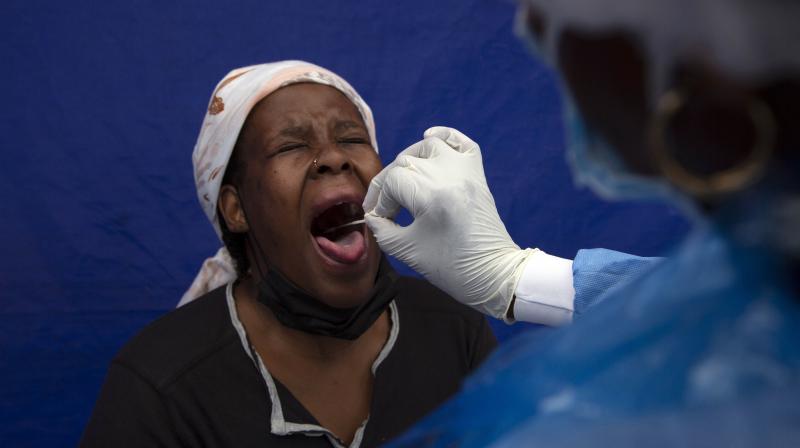 JOHANNESBURG: South Africa, where the Omicron variant was detected in November, said Thursday that the country's latest coronavirus wave had likely passed its peak without a significant increase in deaths and that restrictions would be eased.

The highly contagious Omicron variant, which contains a number of mutations, has fuelled an end-of-year global pandemic resurgence. But mounting evidence, including in South Africa, has given rise to hopes it may be less severe than other strains.

"All indicators suggest the country may have passed the peak of the fourth wave," the South African presidency said in a statement that announced the end of the nightly curfew.

Infections dropped by almost 30 percent last week compared to the preceding seven days, according to the presidency, while hospital admissions also declined in eight of the nine provinces.

During the spike, only a marginal increase in Covid-19 deaths was noted, it added.

"While the Omicron variant is highly transmissible, there has been lower rates of hospitalisation than in previous waves," the statement said.

"This means that the country has a spare capacity for admission of patients even for routine health services."

Omicron was first identified in South Africa and Botswana in late November. It quickly became the dominant strain in South Africa, causing an explosion of infections with a peak of about 26,000 daily cases recorded by mid-December, according to official statistics.

The variant is currently present in more than 100 countries, according to the World Health Organization, and affects vaccinated people as well as those who have already had coronavirus.

South Africa has been the hardest hit by coronavirus on the continent, recording more than 3.4 million cases and 91,000 deaths. But fewer than 13,000 infections had been recorded in the past 24 hours.

"The speed with which the Omicron-driven fourth wave rose, peaked and then declined has been staggering. Peak in four weeks and precipitous decline in another two," Fareed Abdullah of the South African Medical Research Council posted on Twitter.

While many Omicron-affected countries are reimposing virus countermeasures, South Africa announced it was reversing course just ahead of New Year's Eve celebrations.

Calls for the midnight to 4 am curfew to be lifted had been mounting in the hospitality sector, with owners launching an online petition addressed to President Cyril Ramaphosa.

"The curfew will be lifted. There will therefore be no restrictions on the hours of movement of people," the presidency's statement said.

Alcohol sales would be permitted after 11 pm for licensed premises.

Mask-wearing remains compulsory in public spaces and public gatherings are limited to 1,000 people indoors and 2,000 outdoors.

The government continued to stress the need for caution and vaccination, however.

"The risk of increased infections remains high given the high transmissibility of the Omicron variant," the presidency warned.