A number of the victims burned to death, trapped on the upper level of the interprovincial bus in Lima, firefighters said. 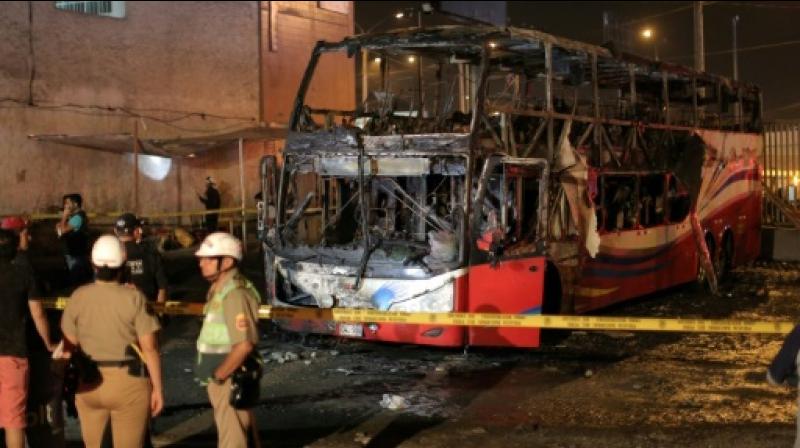 AFP photographed one woman weeping, her face buried in her hands, while paramedics checked her. (Photo: AFP)

Lima: At least 20 people were killed and about 10 injured Sunday night in a bus fire at an illegal transport terminal in the Peruvian capital, emergency services said.

A number of the victims burned to death, trapped on the upper level of the interprovincial bus in Lima, firefighters said. Passersby described scenes of panic and cries of terror.

Much of the vehicle was reduced to a skeleton, and the corpses of some victims could still be seen in the seats. Others asphyxiated on the stairway connecting the upper and lower levels.

The tragedy reflected the chaos of Peru's public transport system, particularly in the capital of 10 million people where authorities are overwhelmed by transport problems.

Initial reports said an electrical fault at the rear of the bus triggered the blaze just after 7:30 pm (0030 GMT). "The fire led to the deaths of at least 20 people," said Lewis Mejia, a fire department official.

Authorities did not say how many people were on board. One unidentified man, broken by grief, told local television that he had lost six family members including his wife, children and grandchildren.

AFP photographed one woman weeping, her face buried in her hands, while paramedics checked her. Lima's Mayor Jorge Munoz visited the injured in hospital and announced an investigation to punish those responsible.

"I am totally outraged," he said, recalling that insecurity and other problems had led to the closure of the Fiori terminal last year.

The station is in Lima's populous northern San Martin de Porres district, from where the bus was to depart for the northern city of Chiclayo.

Fiori was operating illegally after local authorities closed it in January 2018 for the unauthorised sale of fuel to public buses. The fire was one of the worst in Lima since December 2001, when a fireworks blast caused a market blaze that killed about 300 people.