New York governor said that arms, even if they are concealed, will be prohibited in bars, libraries, schools, govt buildings and hospitals 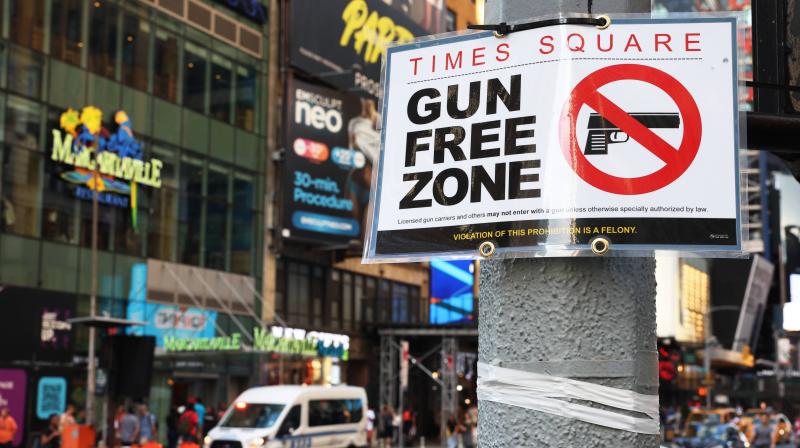 NEW YORK: It will soon be forbidden to carry a firearm, even concealed, in the famed Times Square district and other public places in the city and state of New York, authorities announced on Wednesday.

New York's legislature passed -- and its Democratic Governor Kathy Hochul signed -- legislation restricting the possession of firearms in sensitive locations earlier this year, and it comes into force on Thursday.

It was part of a reaction to a late June ruling by the conservative-majority US Supreme Court that enshrined the right of Americans to leave their homes armed, striking down a 1913 New York law that restricted the carrying of firearms.

"The US Supreme Court's... decision was the shot heard round the world that took dead aim at the safety of all New Yorkers," the city's Democratic mayor, Eric Adams, told journalists.

"New York City will defend itself against this decision, and, beginning tomorrow, new eligibility requirements for concealed carry permit applicants and restrictions on the carrying of concealed weapons in 'sensitive locations,' like Times Square, take effect," said Adams, a former police officer.

The mayor unveiled a "Times Square: Gun Free Zone" sign that will be hung by Thursday in and around the iconic square in the heart of Manhattan, where giant electronic billboards are lit day and night for the 50 million visitors who flock there each year.

The governor of the fourth-largest US state added that weapons, even if they are concealed, will be prohibited in "bars, libraries, schools, government buildings and hospitals, among others."

Hochul said she refuses "to surrender my right as Governor to protect New Yorkers from gun violence or any other form of harm. In New York State, we will continue leading the way forward and implementing common sense gun safety legislation."

The restrictions do not apply to law enforcement officers.