Officials find a note, hand-written in possibly Arabic, inside the truck that barrelled down a bike path near World Trade Center. 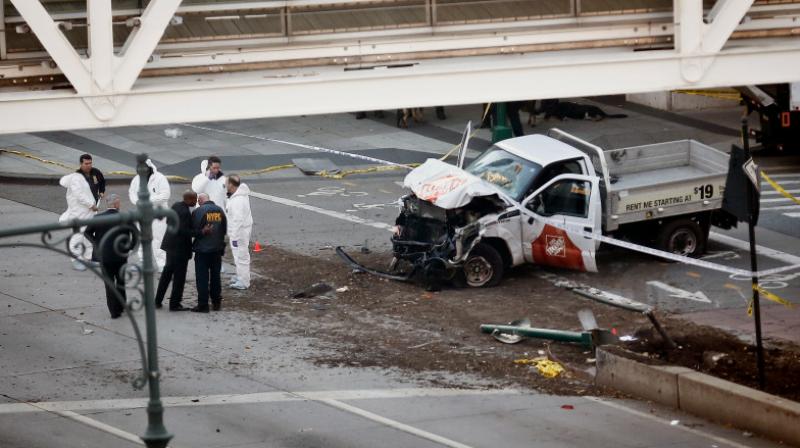 Authorities stand near a damaged Home Depot truck after a motorist drove onto a bike path near the World Trade Center memorial, striking and killing several people Tuesday in New York. (Photo: AP)

Washington: In the aftermath of the first deadly attack in New York blamed on terror since the September 11, 2001, carnage in the city, President Donald Trump said on Tuesday he had ordered more robust "extreme vetting" of travellers coming into the United States.

At least eight people were killed and 11 other injured in Lower Manhattan Tuesday after a gunman in a truck plowed through a busy bike path, an incident the US termed as an "act of terrorism".

The suspect, 29-year-old Sayfullo Saipov said to be from Uzbekistan, was shot in the stomach before being arrested.

"I have just ordered Homeland Security to step up our already Extreme Vetting Program. Being politically correct is fine, but not for this!" Trump tweeted.

His administration announced last week that it would resume accepting refugees after a 120-day ban, though arrivals from 11 "high-risk" countries, most of them home to Muslim majorities, will still be blocked.

"Our thoughts and prayers are with the victims of Tuesday’s terrorist attack in New York City and their families," Trump had said in a statement after the attack.

Earlier, the US president took to Twitter to decry the attack, saying "we must not allow ISIS to return".

"In NYC, looks like another attack by a very sick and deranged person. Law enforcement is following this closely. NOT IN THE U.S.A.!" Trump tweeted.

"We must not allow ISIS to return, or enter, our country after defeating them in the Middle East and elsewhere. Enough!" he said in another tweet.

Two law enforcement officials say a note was recovered inside the truck that barrelled down a bike path near the World Trade Center, killing eight people.

One official says the note was hand-written in a foreign language, possibly Arabic. The contents are being investigated, but the officials say the document supported the belief the act was terrorism.

The officials weren't authorized to speak publicly about an ongoing investigation and spoke to The Associated Press on the condition of anonymity.

Police say the truck's driver turned onto the bike path Tuesday afternoon, striking several people before plowing into a school bus. Officials say he got out of the truck waving a pellet gun and a paint gun and was shot by a police officer. He's in critical condition after surgery.

The van is parked near the company's rental trucks. Officials tell The Associated Press the man suspected of killing eight people and injuring 11 more on the bike path rented a truck from a Home Depot in New Jersey about an hour before Tuesday's attack.

The man was shot by a police officer and is in custody in critical condition.

The Passaic (puh-SAY'-ihk) Home Depot remains open. The minivan is cordoned off.

Home Depot spokesman Matthew Harrigan says the company is "fully cooperating" with law enforcement. He says the company requires a driver's license, insurance information and a credit card deposit to rent a truck.

New York Gov. Andrew Cuomo (KWOH'-moh) has increased security at airports, bridges, tunnels and mass transit systems around the state following a vehicle attack on a bike path near the World Trade Center.

The Democratic governor has directed the lights on the spire of 1 World Trade Center be lit in red, white and blue in honor of freedom and democracy. He says additional security personnel are being deployed to high-density areas and large public gatherings.

Eight people were killed and 11 were injured when a man drove a rented truck down a bike path Tuesday afternoon. Police say they shot and wounded the attacker but he's expected to survive.

A US official familiar with the investigation into what happened says the man is from Uzbekistan and came to the US in 2010. Another official says the man has a Florida license but may have been staying in New Jersey.