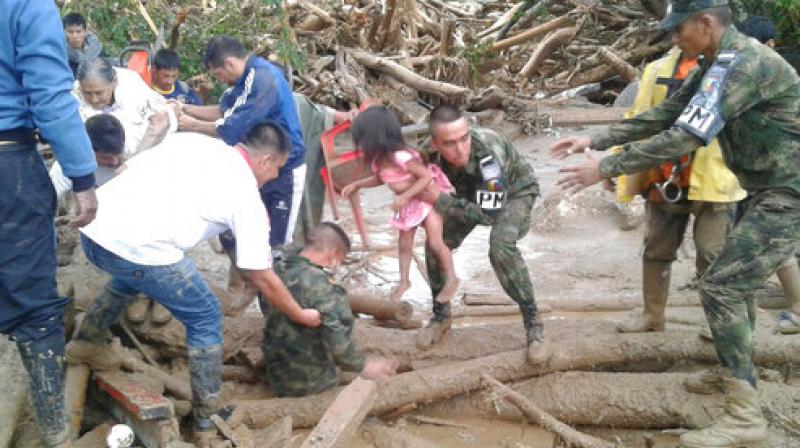 Colombian National Army, soldiers rescue a child, after an avalanche of water from an overflowing river swept through the city as people slept. (Photo: AP)

They were the latest victims of floods that have struck the Pacific side of South America over recent months, also killing scores of people in Peru and Ecuador.

In the southwestern Colombian town of Mocoa, the surge swept away houses, bridges, vehicles and trees, leaving piles of wrecked timber and brown mud, army images from the area showed.

The mudslides struck late Friday after days of torrential rain in the Amazon basin area town of 40,000. "The latest information we have is that there are 206 people confirmed dead, 202 injured, 220 missing, 17 neighbourhoods hit hard," Colombian Red Cross chief Cesar Uruena told AFP on Saturday.

He declared a public health and safety emergency to speed up rescue and aid operations. He also expressed his condolences to victims' families. Putumayo Governor Sorrel Aroca called the development "an unprecedented tragedy" for the area.

There are "hundreds of families we have not yet found and whole neighbourhoods have disappeared," he told W Radio. Carlos Ivan Marquez, director of the National Disaster Risk Management Unit, told AFP the mudslides were caused by the rise of the Mocoa River and tributaries.

The rivers flooded causing a "big avalanche," the army said in a statement. Some 130 millimeters of rain fell Friday night, Santos said. "That means 30 per cent of monthly rainfall fell on last night, which precipitated a sudden rise of several rivers," he said.

He promised earlier on Twitter to "guarantee assistance to the victims of this tragedy, which has Colombians in mourning." "Our prayers are with the victims and those affected," he added.

A thousand emergency personnel were helping the rescue effort. Mocoa was left without power or running water; there were reports of some looting in efforts to get water.