n recent weeks, Hong Kong has been shaken by huge demonstrations against a controversial extradition bill. 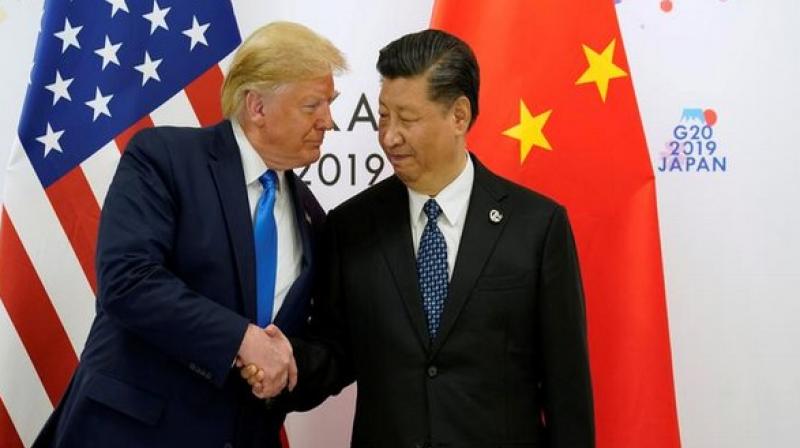 'I've rarely seen a protest like that, it's very sad to see,' Trump told reporters in the Oval Office, adding that he hoped the matter 'gets solved.' (Photo ANI)

Washington: US President Donald Trump on Monday said that he "briefly" discussed the Hong Kong protests during his meeting with Chinese counterpart Xi Jinping.

He also said that he wished that the matter "gets solved", reported South China Morning Post.

"I've rarely seen a protest like that, it's very sad to see," Trump told reporters in the Oval Office, adding that he hoped the matter "gets solved."

"I was with President Xi of China [...] and we talked about it briefly," said Trump, who met Xi on the sidelines of the G-20 meeting.

The US State Department also called for calm in Hong Kong.

Before the G-20 summit, China had made it clear that it would "not allow" the Hong Kong protests to be brought up at the G20 meeting in Osaka.

A group of Hong Kong protesters had also rallied in the Japanese city against the extradition bill and Chinese involvement in the city.

The recent wave of Hong Kong protests marked a break from the peaceful demonstrations against the controversial extradition bill after a group of protesters smashed their way into the offices of the legislature and wrecked the building on Monday evening.

Videos broadcast from inside the building by local television networks showed riot police standing behind metal shutters as protesters repeatedly slammed against them and tried to pry them open in an apparent effort to enter the government complex.

Earlier on Monday, the police, in a statement, said that the protesters had pelted officers with objects containing an "unknown liquid," which made their skin swollen and itchy.

As many as 13 police officers were injured in the clashes. Hospitals and police have not yet confirmed the number of injuries from the clashes.

July 1, the anniversary of the handover, has always been marked by marches featuring hundreds of thousands of people who want to demonstrate Hong Kong's unique status and democratic characteristics.

But after weeks of unprecedented tensions in the semi autonomous territory, protesters saw the occasion as their final chance for a massive stand against a government they believe is still not working in their interests.

An hour into the planned afternoon march, police sent out a warning, discouraging people from joining the procession over fears of a "safety threat," but tens of thousands showed up in a procession that again shut down roads.

In recent weeks, Hong Kong has been shaken by huge demonstrations against a controversial extradition bill which many fear could be used to deport political activists and dissidents to mainland China.

The said bill was proposed on April 3, and its opposers argue that its controversial amendments will leave anyone on Hong Kong soil vulnerable to being grabbed by the Chinese authorities for political reasons or inadvertent business offences.