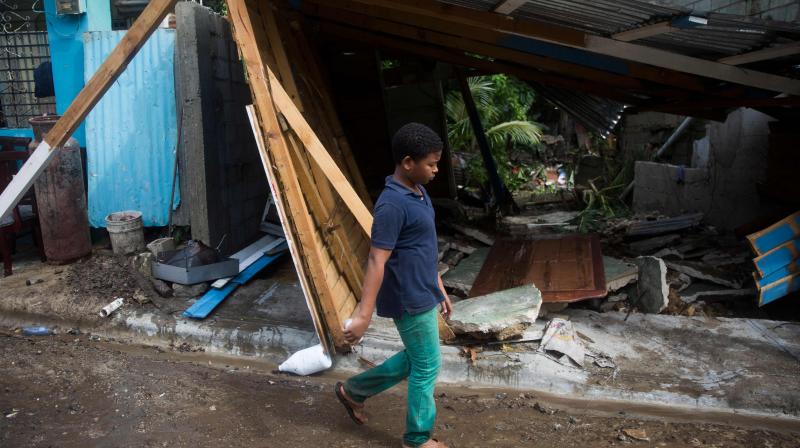 A boy walks past a destroyed house after the overflow of the Magua river due to heavy rains caused by Isaias storm in the city of Hato Mayor, northwest of Santo Domingo, Dominican Republic. (AFP)

Miami: Florida braced for hurricane conditions Sunday, with forecasters warning tropical storm Isaias could strengthen before slamming into the state, which is already struggling with the coronavirus.

Isaias is threatening to trigger a storm surge and flash flooding in parts of Florida, the National Hurricane Center said Sunday, adding that "preparations to protect life and property should be rushed to completion."

Winds were gusting up to 70 miles (110 kilometers) an hour as the tropical storm churned toward Miami, in Florida's southeast.

The deadly storm earlier dumped torrential rain on the Bahamas and was downgraded from a Category 1 hurricane.

Florida's coast experienced heavy gusts of wind early Sunday, and President Donald Trump declared an emergency ahead of the storm's arrival to free up federal funds.

"We will start seeing impacts from the storm tonight and then obviously through tomorrow into tomorrow night," Florida Governor Ron DeSantis said Saturday evening, adding that Palm Beach county had issued a voluntary evacuation order.

As the state battened down in the face of raging winds and rain, it was also battling its coronavirus outbreak, which has complicated preparations.

Florida has the second highest number of cases of all states except California -- which has double its population.

On Saturday, Florida reported 179 deaths -- a new state record that pushed its virus death toll to 6,843.

The storm has had an impact beyond earth too, with NASA monitoring whether the SpaceX Crew Dragon craft could safely bring two astronauts back from the International Space Station for a splashdown on Sunday in the Gulf of Mexico.

"The teams are working really hard, especially with the dynamics of the weather over the next few days around Florida," Doug Hurley, one of the astronauts, said in a farewell ceremony on board the ISS.

Florida residents rushed to stock up on essentials as the storm approached.

Jason Woodall, 44, was boarding up the Miami Beach store where he works, while others nearby piled sandbags.

"You always got to be prepared, just in case, because you never know," he said. "It could always strengthen."

"Remember a couple of years ago? It stopped right outside, then spun and gained a huge amount of strength," he added, referring to Hurricane Michael, a powerful Category 5 storm that struck the area in 2018.

With the high number of virus cases, it's better to "just hunker down rather than sending people to the road," DeSantis said, unless the situation was so threatening that people needed to seek shelter.

Still, the storm could harm efforts to contain the pandemic.

"Once we resume testing, it's very possible we will have a surge again," Miami Mayor Francis Suarez told CNN on Sunday.

Florida's coronavirus testing centers were closed Thursday and will not reopen until they get the all-clear after the storm.

The state's emergency management division explained that the centers are housed in tents and could not withstand the high winds.

Isaias unleashed destruction in Puerto Rico, downing trees and electric lines and inundating houses as it cut a path through the island on Thursday.

Authorities there said Saturday they had recovered the body of a 56-year-old woman whose car had been swept away by storm waters.

In the Bahamas, the deputy director of the country's meteorology department, Jeffrey Simmons, told The Nassau Guardian "the worst part" of the storm came to New Providence, the most populous island, early Saturday.

It is the archipelago's first hurricane since Dorian, a Category 5 storm last year that devastated two islands, pummeling them for three days.

And in the Dominican Republic, people were cleaning up after the Magua river burst its banks.