'New deal or no deal': Trump tells US Congress he will terminate NAFTA 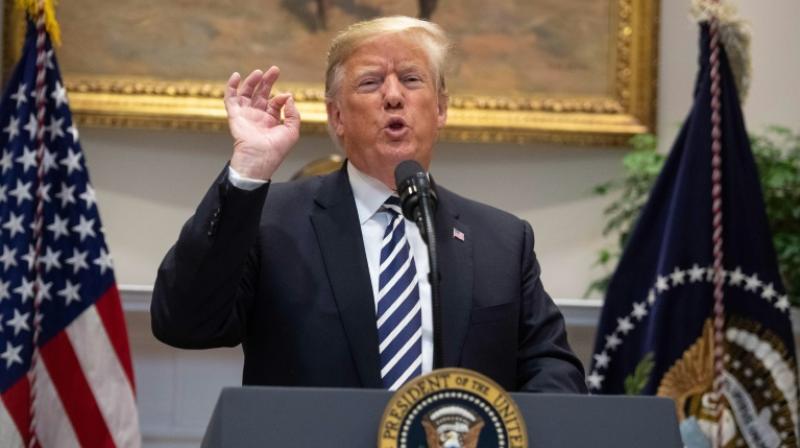 'I will be formally terminating NAFTA shortly,' Trump told reporters aboard Air Force One on his way home from Argentina. (Photo: File)

Aboard Air Force One: US President Donald Trump said on Saturday he will give formal notice to the US Congress in the near future to terminate the North American Free Trade Agreement (NAFTA), giving six months for lawmakers to approve a new trade deal signed on Friday.

"I will be formally terminating NAFTA shortly," Trump told reporters aboard Air Force One on his way home from Argentina.

"Just so you understand, when I do that - if for any reason we're unable to make a deal because of Congress then Congress will have a choice" of the new deal or returning to trade rules from before 1994 when NAFTA took effect, he said.

Trump's decision to set in motion a possible end to largely free trade in North America comes amid some scepticism from Democrats about the new trade deal.

The US landscape will shift significantly in January when Democrats take control of the House of Representatives, after winning mid-term elections in November.

Presumptive incoming Speaker of the House Nancy Pelosi described the deal as a "work in progress" that lacks worker and environment protections.

"This is not something where we have a piece of paper we can say yes or no to," she said at a news conference on Friday, noting that Mexico had yet to pass a law on wages and working conditions.

Other Democrats, backed by unions that oppose the pact, have called for stronger enforcement provisions for new labour and environmental standards, arguing that USMCA's state-to-state dispute settlement mechanism is too weak.

A 2016 congressional research report said there is a debate over whether a president can withdraw from a trade deal without the consent of Congress, and there is no historical precedent for the unilateral withdrawal from an free trade deal by a president that had been approved by Congress.

The issue could ultimately be decided by the US courts.

The US Chamber of Commerce said last year that exiting NAFTA without a new deal could devastate American agriculture, cost hundreds of thousands of jobs and "be an economic, political and national-security disaster."

The leaders of the three countries agreed on a deal in principle to replace NAFTA, which governs more than USD 1.2 trillion of mutual trade, after acrimonious negotiations concluded on September 30.

Trump had vowed to revamp NAFTA during his 2016 presidential election campaign. He threatened to tear it up and withdraw the United States completely at times during the negotiation, which would have left trade between the three neighbours in disarray.

The three were still bickering over the finer points of the deal just hours before officials were due to sit down and sign it.

Legislators in Canada and Mexico must still approve the pact.

Trump had forced Canada and Mexico to renegotiate the 24-year-old agreement because he said it encouraged US companies to move jobs to low-wage Mexico.

US objections to Canada's protected internal market for dairy products was a major challenge facing negotiators during the talks, and Trump repeatedly demanded concessions and accused Canada of hurting US farmers.