Tillerson reached out by phone to counterparts from Mexico and Canada, spoke by phone with Israeli Prime Minister Benjamin Netanyahu. 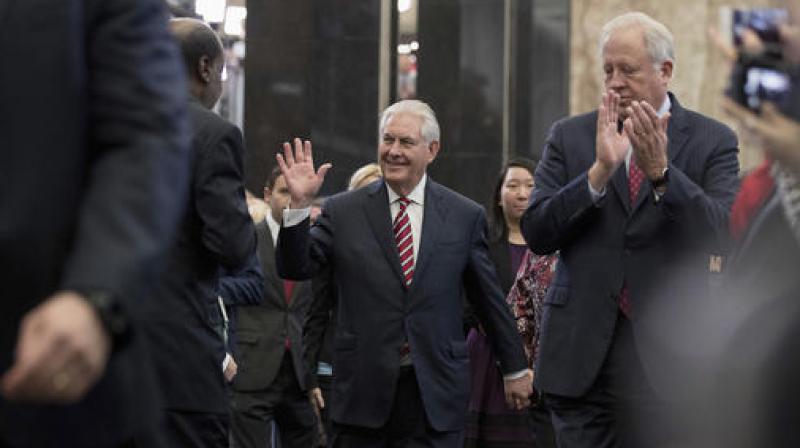 Washington: US Secretary of State Rex Tillerson called for unity and understanding on his first day at the State Department amid internal dissent over policies of President Donald Trump, which have also antagonized a range of allies. Within hours of starting the job, Mr Tillerson reached out by phone to counterparts from Mexico and Canada, spoke by phone with Israeli Prime Minister Benjamin Netanyahu and met with German Foreign Minister Sigmar Gabriel, department officials said.

Hundreds of State Department officials greeted the former Exxon Mobil Corp chief executive with applause as he entered the building. Louder cheers broke out when Mr Tillerson thanked acting Secretary of State Tom Shannon for standing in after the departure of John Kerry.

"Hi, I'm the new guy," said Mr Tillerson, who was sworn in on Wednesday after the Senate confirmed him to his post despite concerns about his ties with Russia. Mr Trump has called for closer relations with Russian President Vladimir Putin.

In remarks that did not touch on foreign policy specifics, Mr Tillerson addressed the dissent within the department that emerged this week in a memo signed by more than 900 officials in protest against Mr Trump's decision to suspend the US refugee program and restrict travelers from seven Muslim-majority countries.

"One of the great challenges and thrills for the State Department staff is deciding how to confront changing conditions in every corner of the world," said Mr Tillerson, "I encourage all of you to use your natural and well-developed skills to adapt to changes here at home as well.

"I know this was a hotly contested election and we do not all feel the same way about the outcome," said Mr Tillerson.

"Each of us is entitled to expression of our political beliefs, but we cannot let our personal convictions overwhelm our ability to work as one team," he added.

He also signaled he would impose changes to improve the functioning of the department and said the security of diplomats was a priority.

There was no readout after his meeting with Mr Gabriel at the State Department, although discussions were likely focused on the NATO alliance, the future of the Iran nuclear agreement and trade.

His separate phone calls with foreign ministers from Canada and Mexico coincided with Mr Trump saying on Thursday he wanted early talks on the North American Free Trade Agreement, which he wants to renegotiate or repeal.

Mr Tillerson also spoke by phone with Mr Netanyahu, the State Department said in a statement. It did not say whether they discussed a White House statement that said Israeli settlements in occupied territories may not be helpful in achieving peace with Palestinians, adopting a more measured tone than its previous pro-Israel announcements.

Over the past 48 hours, more foreign policy challenges piled up as tensions erupted between the United States and ally Australia over an existing refugee swap, which Mr Trump called a "dumb deal."

Strains with Iran also increased after the White House said it was putting Tehran on notice for test-firing a ballistic missile and the new administration moved to impose sanctions on several Iranian entities on Friday, according to sources familiar with the matter.