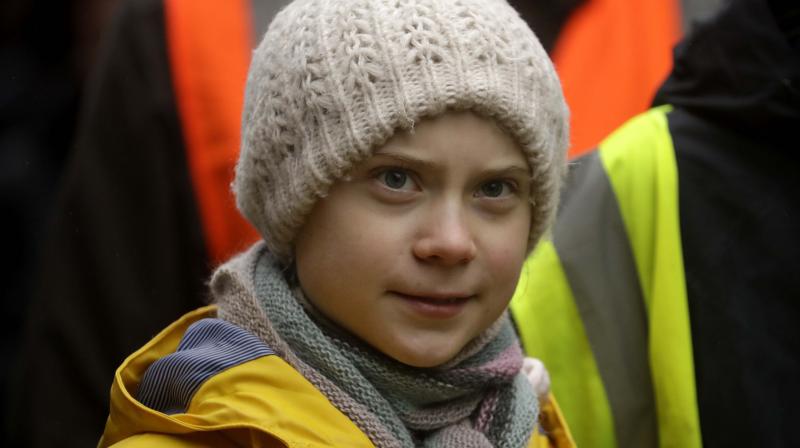 File photo of teenage climate activist Greta Thunberg marches with other demonstrators as she participates in a school strike climate protest in Bristol, England on February 28, 2020. (AP)

Montreal: A Canadian oil services company has apologized after an outcry over a sticker that showed their logo under a sexualized image targeting Swedish teen climate activist Greta Thunberg.

The image, shared widely on social media last week, shows a black-and-white drawing of a naked woman with her back turned, two hands pulling on her braids -- an apparent reference to 17-year-old Thunberg's signature hairstyle.

The word ‘Greta’ and X-Site Energy Services's logo appear underneath the illustration.

The oil and gas services provider released a statement apologizing for the image and promising to “do better.”

“We deeply regret the pain we may have caused,” the statement said. “Explicit images and personal attacks on anyone are unacceptable.”

Thunberg has inspired millions of young people around the world by spearheading a movement since 2018 to demonstrate on Fridays in frustration at government efforts to tackle climate change.

But she has been criticized and abused for her uncompromising attitude.

“They are starting to get more and more desperate,” Thunberg tweeted on Saturday about detractors of her movement. “This shows that we're winning.”

X-Site Energy Services said it is working to remove the decals from circulation and asked others to stop sharing the image. It also said it plans to train employees to follow a new “code of conduct.”

She rallied with thousands more the following month in oil-rich Alberta.