Local officials have offered lodging and arranged transport for the migrants, in a journey organized by immigrant advocacy group. 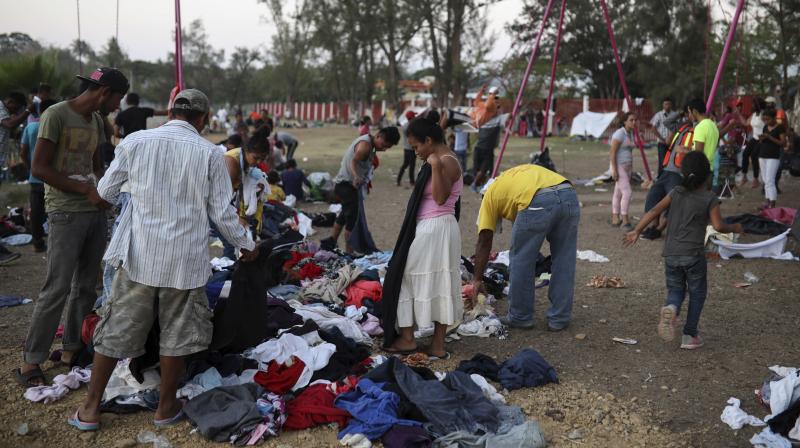 Local officials have offered lodging in town squares and empty warehouses or arranged transport for the migrants, participants in a journey organized by the immigrant advocacy group Pueblo Sin Fronteras. (Photo: AP)

Mexico/Edinburgh: In some of the Mexican towns playing host to a "caravan" of more than 1,200 Central American migrants heading to the US border, the welcome mat has been rolled out despite President Donald Trump's call for Mexican authorities to stop them.

Local officials have offered lodging in town squares and empty warehouses or arranged transport for the migrants, participants in a journey organized by the immigrant advocacy group Pueblo Sin Fronteras. The officials have conscripted buses, cars, ambulances and police trucks. But the help may not be entirely altruistic.

"The authorities want us to leave their cities," said Rodrigo Abeja, an organizer from Pueblo Sin Fronteras. "They've been helping us, in part to speed the massive group out of their jurisdictions."

At some point this spring, the caravan's 2,000-mile (3,200-km) journey that began at Tapachula near the Guatemalan border on March 25 will end at the US border, where some of its members will apply for asylum, while others will attempt to sneak into the United States.

So far the Mexican federal government has provided little guidance on how to handle the migrants but Abeja worries that local reactions will change.

"There's a lot of pressure from authorities to stop the caravan because of Donald Trump's reaction," he said.

Trump railed on Twitter against the caravan on Monday, accusing Mexico of "doing very little, if not NOTHING" to stop the flow of immigrants crossing the US border illegally. "They must stop the big drug and people flows, or I will stop their cash cow, NAFTA," he concluded.

Mexico's interior minister Alfonso Navarrete did not directly address the caravan, but he wrote on Twitter that he spoke to the US Homeland Security Secretary Kirstjen Nielsen on Monday, and that the two had "agreed to analyze the best ways to attend to the flows of migrants in accordance with the laws of each country."

Mexico must walk a delicate line with the United States as the countries are in the midst of renegotiating the North American Free Trade Agreement (NAFTA) along with Canada. At the same time, Mexican left-wing presidential candidate Andres Manuel Lopez Obrador has an 18-point lead ahead of the July 1 election, according to a poll published on Monday.

A Lopez Obrador victory could usher in a Mexican government less accommodating toward the United States on both trade and immigration issues.

Former President Vicente Fox called for Mexican officials to take a stand against Trump's attacks. Trump keeps "blackmailing, offending and denigrating Mexico and Mexicans," he wrote on Twitter on Monday.

Under Mexican law, Central Americans who enter Mexico legally are generally allowed to move freely through the country, even if their goal is to cross illegally into the United States.

Migrants in the caravan cite a variety of reasons for joining it. Its members are disproportionately from Honduras, which has high levels of violence and has been rocked by political upheaval in recent months following the re-election of US-backed president, Juan Orlando Hernandez in an intensely disputed election.

Maria Elena Colindres Ortega, a member of caravan and, until January, a member of Congress in Honduras, said she is fleeing the political upheaval at home. "We've had to live through fraudulent electoral process," she said. "We're suffering a progressive militarization and lack of institutions, and ... they're criminalizing those who protested."

Colindres Ortega, who opposed the ruling party in Honduras, said she spiraled into debt, after serving without pay for the last 18 months of her four-year term. She decided to head north after a fellow congressman from her party put out word on Facebook that a caravan of migrants was gathering in southern Mexico, leaving home with a small bag with necessities and photos of her children.

Pueblo Sin Fronteras has helped coordinate migrant caravans for the last several years, though previously they had a maximum of several hundred participants. During the journey members of the organization instruct the migrants about their rights.

"We accompany at least those who want to request asylum," said Alex Mensing, Pueblo Sin Fronteras' program director. "We help prepare them for the detention process and asylum process before they cross the border, because it's so difficult for people to have success if they don't have the information."

Typically, Central Americans have not fared well with US asylum claims, particularly those from Honduras. A Reuters analysis of immigration court data found that Hondurans who come before the court receive deportation orders in more than 83 percent of cases, the highest rate of any nationality. Hondurans also face deportation in Mexico, where immigration data shows that 5,000 Hondurans were deported from Mexico in February alone, the highest number since May 2016.

Maunel Padilla, chief of the border patrol's Rio Grande Valley sector, one of the busiest crossing points on the US Mexico border, said in an interview with Reuters that he worries the caravan could "generate interest for other groups to do the same thing," but he was not terribly nervous about coping with the group currently travelling.

"Not to be flippant," Padilla said, "but it's similar numbers to what we are seeing every day pretty much."