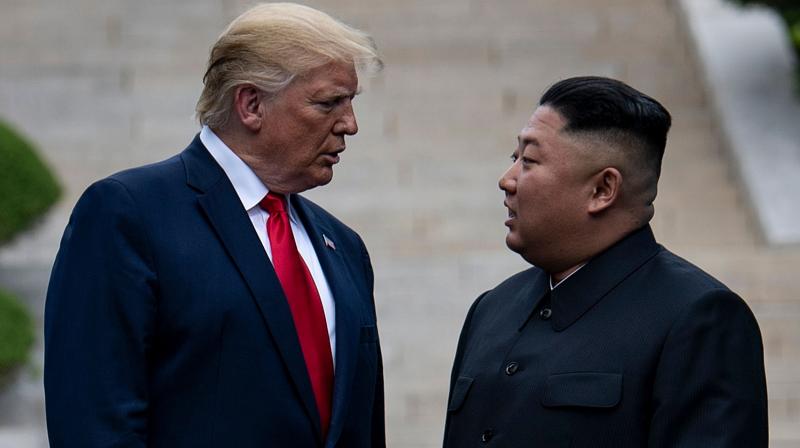 Washington: U.S. President Donald Trump on Saturday welcomed the reemergence of North Korea’s Kim Jong Un after weeks of speculation about his health, but prospects for the U.S. efforts to persuade Pyongyang to denuclearize appear as bleak as ever.

On Saturday, North Korean media said Kim cut a ribbon at a ceremony on Friday to mark the completion of a fertilizer plant.

It had not reported on Kim’s whereabouts since he presided over a meeting on April 11, provoking speculation that he was seriously ill and raising concerns about instability in his nuclear-armed country that could affect other North Asian countries and the United States.

Kim was seen in photographs smiling and talking to aides at the ceremony and also touring the plant. The authenticity of the photos could not be verified.

A U.S. government source familiar with intelligence reporting said Washington strongly believes Kim is alive, but has not been able to confirm the photos were taken on Friday, or explain why he had not been seen for weeks.

Trump, who met Kim three times in 2018 and 2019 in unprecedented but unsuccessful personal attempts to persuade him to give up his nuclear weapons, tweeted on Saturday: “I, for one, am glad to see he is back, and well!”

Trump has continued to refer to Kim as a friend, but the mystery of the past three weeks has served to emphasize the limits of that relationship and his lack of progress in persuading North Korea to give up a weapons program that now threatens the United States.

The lack of a clear successor for Kim has raised fears about the security of the program in the event of political turmoil in North Korea, which borders U.S. strategic rival China and U.S. allies South Korea and Japan.

On Thursday, U.S. Secretary of State Mike Pompeo said Washington was monitoring the situation closely and that the U.S. focus remained on “making sure that that country doesn’t have nuclear weapons.” North Korea has shown no willingness to abandon weapons it sees as vital for defense of the nation and the Kim dynasty.

“I would think we are back to where we were,” said Joseph Yun, who was a U.S. North Korea envoy under former President Barack Obama and at the start of the Trump administration.

Since U.S.-North Korea talks stalled last year, Kim has personally presided over numerous short-range missile tests, but has resisted a return to long-range missile and nuclear testing suspended since 2017.

Analysts say the scare over Kim’s health emphasized the need for thorough contingency planning, something complicated by the coronavirus pandemic.

“I doubt we’ll ever have much clarity on what Kim did over the past couple of weeks and the anxiety it caused sparked some real questions about how prepared we are to deal with this kind of circumstance,” said Jenny Town of 38 North, a Washington-based North Korea analysis project.

“No one seemed particularly prepared to respond in case of a North Korean crisis given the current political conditions. That is something that should be addressed.”

A U.S. response to such a crisis has been complicated by a souring of relations with China - the country which has the most influence with Pyongyang - with Trump accusing Beijing of mishandling the coronavirus outbreak and speaking of the need for compensation for the enormous economic and human toll.

In 2017, when ties were less strained, then U.S. Secretary of State Rex Tillerson said Washington had been talking to China about how to secure North Korea’s nuclear weapons in the event of a collapse of the government there.

He said Washington had given Beijing assurances that if U.S. forces ever had to cross into North Korea, they would not stay there and would return across the border into South Korea.

In spite of Kim’s reappearance, questions remain over the health of a leader, who, although only in his mid-30s, is significantly overweight and a heavy smoker.

State TV footage showed Kim’s leg movements appearing stiff and jerky and one of images showed a green golf cart in the background, similar to one he used in 2014 after a lengthy public absence.

Specialist North Korea website NK News also spotted a dark colored mark on Kim’s arm in video footage, which was not there on April 11. It quoted medical professionals as saying it could be related to a cardiovascular procedure - possibly a stent placement.

Speculation about Kim’s health has been rife after he missed the birthday celebrations of late state founder Kim Il Sung on April 15.

A South Korean news outlet specializing in North Korea reported that Kim was recovering after a cardiovascular procedure.

In images of the factory visit, Kim was seen accompanied by his younger sister Kim Yo Jong, who has been talked about by experts as a possible successor, although no woman has ever ruled North Korea.

The choice of venue for Kim’s reemergence was concerning for U.S. denuclearization aims.

While it appeared to be a signal to domestic audiences he is watching out for their well-being, nuclear analysts believe the plant could be part of covert uranium enrichment efforts for North Korea’s nuclear program.

A report last month by the James Martin Center for Nonproliferation Studies in Monterey, California said there was strong evidence of the plant’s involvement in uranium extraction.