Pompeo announces fresh restrictions on senior Chinese diplomats in US 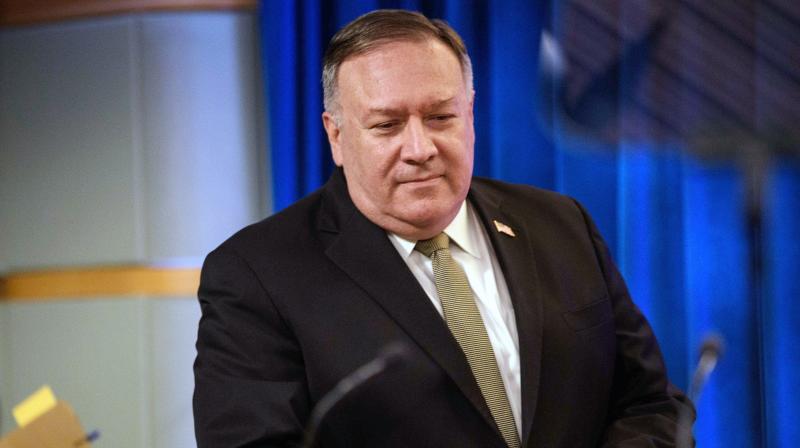 Secretary of State Mike Pompeo arrives to speak at a news conference at the State Department in Washington. (AP)

Washington: The United States said on Wednesday it would require senior Chinese diplomats to get State Department approval before visiting U.S. university campuses or holding cultural events with more than 50 people outside mission grounds.

Washington cast the move as a response to Beijing’s restrictions on American diplomats in China. It comes as part of a Trump administration campaign against alleged Chinese influence operations and espionage.

The State Department said it would also take action to help ensure all Chinese embassy and consular social media accounts were “properly identified.”

“We’re simply demanding reciprocity,” U.S. Secretary of State Mike Pompeo told a news briefing. “Access for our diplomats in China should be reflective of the access that Chinese diplomats in the United States have, and today’s steps will move us substantially in that direction.”

It was the latest U.S. step to curb Chinese activity in the United States in the run-up to the November presidential election, in which President Donald Trump has made a tough approach to China a key foreign policy platform.

China’s Washington embassy called the move “yet another unjustified restriction and barrier on Chinese diplomatic and consular personnel” that “runs counter to the self-proclaimed values of openness and freedom of the U.S. side.”

Pompeo also said the State Department had written recently to the governing boards of U.S. universities alerting them to threats posed by the Chinese Communist Party.

“These threats can come in the form of illicit funding for research, intellectual property theft, intimidation of foreign students and opaque talent recruitment efforts,” Pompeo said.

He said universities could help ensure they had clean investments and endowment funds by disclosing Chinese firms in such funds and dropping those connected to human rights abuses.

On Tuesday, Pompeo said he was hopeful the dozens of Chinese-government funded Confucius Institute cultural centers on U.S. campuses, which he accused of working to recruit “spies and collaborators,” would all be shut by the year end.

On Wednesday, the Washington-based Confucius Institute U.S. Center, which was required last month to register as a foreign mission after Pompeo accused it of advancing Beijing’s “malign influence,” said it had been mischaracterized by the State Department as a headquarters for Confucius Institutes.

“Contrary to what people have heard from the State Department, CI programs in the U.S. are independent of each other, set up and run by the schools that choose to set up Chinese language education, and staffed by people hired and supervised by those schools,” it said in a statement.

Pompeo said he planned to discuss China and other regional issues with the 10-nation Association of Southeast Asian Nations (ASEAN) and other Indo-Pacific countries in virtual meetings next week.

The State Department said Pompeo would participate in an East Asia Summit Foreign Ministers’ meeting and another with his ASEAN counterparts on Sept. 9.

It said that on Sept. 11, he would launch a cooperation partnership with Mekong River partner countries, Cambodia, Laos, Myanmar, Thailand, and Vietnam, aimed at strengthening their autonomy, economic independence, and sustainable development.

Also that day, he will participate in a meeting of the ASEAN Regional Forum, a 27-nation grouping bringing ASEAN together with dialogue partners from around the world.

Wednesday’s U.S. move goes further than one last October requiring Chinese diplomats to give notice of meetings with state and local officials and at educational and research institutions.