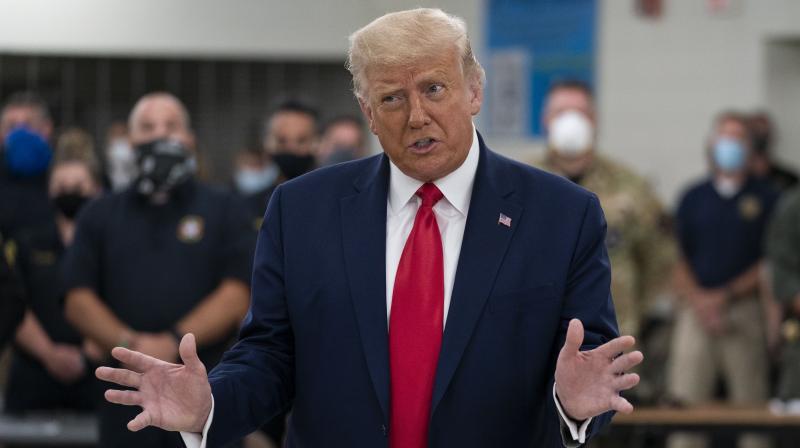 Washington: US President Donald Trump was shifted to a military hospital where he was given Remdesivir therapy following treatment with an experimental drug after testing positive for COVID-19, a development that upended his election campaign just weeks before the presidential polls.

"Going well, I think! Thank you to all. LOVE!!! Trump tweeted on Saturday.

Trump, who showed "mild symptoms" of COVID-19, was flown to Walter Reed Military Medical Centre in Bethesda, a Maryland suburb of Washington DC, on Friday. Trump walked from his residence to take Marine One at the South Lawns of the White House to travel to Walter Reed hospital.

While the president was taken to the military hospital, the first lady stayed back at the White House.

Trump's physician Dr Sean Conley said the president was "fatigued but in good spirits" and, in a later update, that he was doing well.

"I am happy to report that the president is doing well," Conley said in a health bulletin on Friday night, the first after the president was moved to the military hospital as a precautionary measure.

"He is not requiring any supplemental oxygen, but in consultation with specialists we have elected to initiate Remdesivir therapy. He has completed his first dose and is resting comfortably, he said.

The Trump administration had issued an emergency use authorisation for Remdesivir earlier this year after the drug showed moderate effectiveness in improving outcomes for patients who were hospitalised with the coronavirus.

In a video shared on Twitter, Trump said he is "doing very well" and thanked people for their support.

"I think I'm doing very well but we're going to make sure that things work out," Trump said in the 18-second video that he tweeted moments after he arrived at the military hospital.

"The first lady is doing very well. So, thank you very much. I appreciate it. I will never forget it," he said.

Conley earlier said that as a precautionary measure the president received a single 8-gram dose of Regeneron's polyclonal antibody cocktail. "He completed the infusion without the incident," the doctor said.

In addition to the polyclonal antibodies, the president has been taking zinc, vitamin D, famotidine, melatonin and a daily aspirin, he said.

Conley said the first lady remains well with "only a mild cough and headache", and the remainder of the first family "are well and tested negative for SARS-CoV-2 today.

On Friday, White House Chief of Staff Mark Meadows had said the president was showing "mild symptoms" of COVID-19.

"Out of an abundance of caution, and at the recommendation of his physician and medical experts, the president will be working from the presidential offices at Walter Reed for the next few days," White House Press Secretary Kayleigh McEnany said.

Republican Senators Thom Tillis from North Carolina, and Mike Lee from Utah confirmed they have been tested positive for coronavirus.

Tillis along with Lee were seen at the White House last Saturday when President Trump announced his Supreme Court nomination.

Like Tellis and Lee, Conway had participated in the White House event on Saturday.

Trump Campaign Manager Bill Stepien tested positive for COVID-19 on Friday as well. According to Politico, Stepien was experiencing mild flu-like symptoms. He plans to quarantine until he recovers and manage the campaign from home.

Trump and Melania were tested after one of their close aides, Hope Hicks, tested positive for the coronavirus.

In a series of memos, the White House Correspondents Association confirmed that three member journalists have tested positive for COVID-19.

In a message, Xi said that after learning President Trump and Melania have tested positive for COVID-19, he and his wife Peng Liyuan extend sympathy to them and wish them a speedy recovery.

Trump has repeatedly blamed China for the spread of the coronavirus which first emerged in Wuhan in December last year before spreading across the world, killing more than a million people, including over 200,000 in the US.

Democratic presidential candidate Joe Biden and several other politicians have wished Trump and his wife a quick recovery. Biden said Trump's diagnosis is a "bracing reminder" to take the virus seriously as he urged people to wear masks, wash hands, and maintain social distancing.

Trump's 2016 Democratic challenger Hillary Clinton said the pandemic has affected so many and "we must continue to protect ourselves, our families, and communities".