Judge Jackson ordered that the pair remain under home confinement and GPS monitoring. 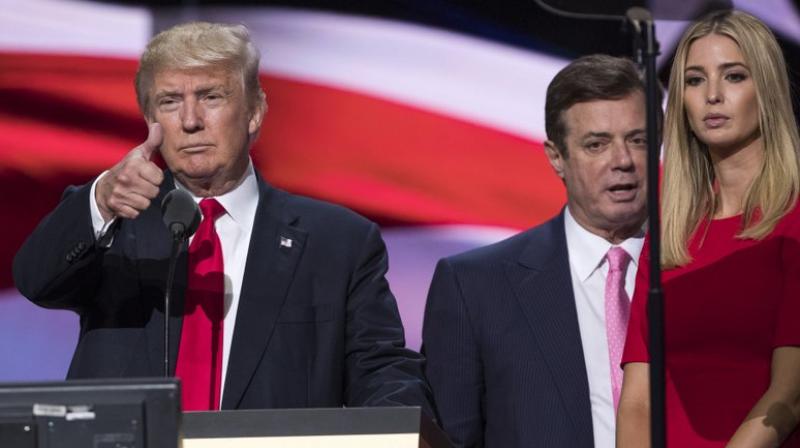 They were arrested following an investigation by special counsel Robert Mueller, who is looking into allegations that members of the Trump campaign colluded with Russia to get him elected. (Photo: AP)

Washington: US President Donald Trump's ex-campaign chairman and an associate were ordered by a judge Thursday to remain under house arrest while they await trial for money laundering and other charges.

Paul Manafort, 68, who managed Trump's campaign from June to August 2016, and Rick Gates, 45, will also continue to be subject to GPS monitoring.

The two men appeared before Judge Amy Berman Jackson in a Washington court to argue for an easing of the pretrial conditions of their release.

Judge Jackson ordered that the pair remain under home confinement and GPS monitoring for the time being and that they appear in court again on Monday.

Manafort and Gates have pleaded not guilty to charges that they allegedly hid millions of dollars gleaned from work with Ukrainian politician Viktor Yanukovych and his pro-Moscow political party.

They were arrested following an investigation by special counsel Robert Mueller, who is looking into allegations that members of the Trump campaign colluded with Russia to get him elected.

Manafort's lawyers on Thursday argued that he was not a flight risk and had no intention of abandoning his wife of nearly 40 years, his two daughters or his grandchildren.

"Given the substantial media coverage surrounding Mr Manafort and this investigation, it is fair to say that he is one of the most recognizable people on the planet today," his lawyers said in a filing with the court. "Query where such an individual could even hide?"

Judge Jackson made it clear she was not happy about the widespread coverage the case is attracting and asked all parties to "refrain from making public statements."

"This case has already received and continues to receive a lot of attention," she said. "It is a criminal trial, not a PR campaign."

Following the arrests, Trump said in a tweet that there was "no collusion" between his campaign and Russia, and noted that the allegations of criminal activity by Manafort came "years ago," before he joined the campaign.

Manafort's indictment made no mention of Russian involvement in the US election campaign, focusing instead on his earlier Ukrainian ties.

A long-time political operative and consultant, Manafort was recruited in March 2016 to round up pro-Trump delegates to the Republican Party convention.

Trump named him campaign chairman in June but he resigned in August as Ukrainian corruption investigators released files showing large payments to Manafort companies and it became clear he was under investigation in the United States over related claims.