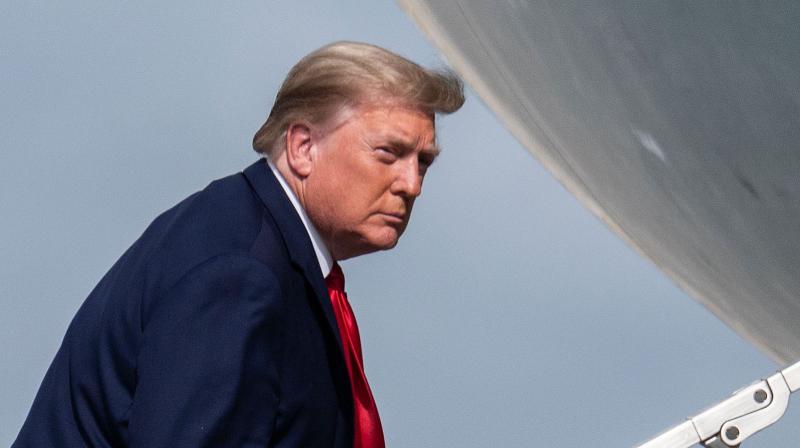 Washington: US President Donald Trump, in an extraordinary one-hour phone call, told Georgia's election chief to reverse President-elect Joe Biden's win and urged him to "find" enough votes to overturn his defeat in the swing state in the November 3 election, according to a secretly-recorded audio of the conversation posted by a major American media outlet.

The Washington Post reported that during the phone call on Saturday Trump urged fellow Republican Brad Raffensperger, the Georgia secretary of state, to "find" enough votes to overturn his defeat, a development that legal scholars described as a flagrant abuse of power and a potential criminal act.

"The people of Georgia are angry, the people in the country are angry. And there's nothing wrong with saying, you know, that you've recalculated," Trump told Raffensperger.

Trump lost the election in Georgia by 11,779 votes.

"Flipping the state is a great testament to our country. It's a testament that they can admit to a mistake. A lot of people think it wasn't a mistake, it was much more criminal than that. But it's a big problem in Georgia, and it's not a problem that's going away," he said.

"The people of Georgia know that this was a scam, and because of what you've done to the president, a lot of people aren't going out to vote [in the runoffs]. A lot of Republicans are going to vote negative because they hate what you did to the president," said the outgoing president.

According to The Washington Post report, throughout the call, Raffensperger and his office's general counsel rejected Trump's assertions, explaining that the president is relying on debunked conspiracy theories and that President-elect Joe Biden's 11,779-vote victory in Georgia was fair and accurate.

"Well, Mr. President, the challenge that you have is, the data you have is wrong," Raffensperger said.

Trump reiterated that there is no way he lost Georgia.

Trump has refused to concede to Biden, a Democrat. He has falsely asserted he won the race while publicly pressuring Republican lawmakers to step up and fight for the Presidency.

The Trump campaign and several of the president's allies have launched dozens of attempts to challenge the election results in numerous swing states. None of those legal efforts has succeeded in invalidating votes for Biden.

The US Supreme Court earlier in December rejected a bid from Texas Attorney General Ken Paxton to sue four key swing states over changes they made to voting procedures.

Top Democratic Senator Dick Durbin, in a statement, said that Trump's recorded conversation with Raffensperger was more than a pathetic, rambling, delusional rant.

"His disgraceful effort to intimidate an elected official into deliberately changing and misrepresenting the legally confirmed vote totals in his state strikes at the heart of our democracy and merits nothing less than a criminal investigation," he said.

"The President is unhinged and dangerous. Those who encourage and support his conduct, including my Senate colleagues, are putting the orderly and peaceful transition of power in our nation at risk," Durbin said.

President Trump lost the 2020 presidential election. Either he is unwell, and really believes he won in Georgia despite all evidence to the contrary, or he knows better, and thinks he can use his office to pressure state officials to change the outcome of the election. Either way, he remains profoundly unfit for office, said Congressman Jerry Nadler, Chairman of the House Judiciary Committee.

"In threatening these officials with vague 'criminal' consequences, and in encouraging them to 'find' additional votes and hire investigators who 'want to find answers', the President may have also subjected himself to additional criminal liability," Nadler said.

The burden now falls to men and women of good conscience to contain the damage Donald Trump seems intent on causing on his way out the door, he said, adding that Trump's "bad faith" lawsuits, his conspiracy theories, and his "outright lies" are destined to fail  indeed, have mostly failed already.

"The American people will draw a straight line from President Trump's phone call, where he implores a state official to "find" the 11,780 votes he needs to overcome his margin of defeat in Georgia, to the efforts of certain members of the House and Senate to block President-Elect Biden's victory when the Electoral College results are certified. Both tactics are reckless, deeply selfish, and place love of power over commitment to our democratic process," Nadler said.

The recorded phone call shows that President Trump is continuing his brazen struggle to overturn the 2020 election results, in this case by threatening Raffensperger if he fails to manufacture votes for a Trump victory, said Senator Dianne Feinstein.

"Not only is pressuring election officials against the law, threatening Raffensperger if he doesn't comply with Trump's wishes borders on extortion. I applaud Secretary of State Raffensperger for not backing down from these threats and telling the president in no uncertain terms that he is wrong," she said.

Biden is scheduled to be inaugurated as the 46th US President on January 20.