Steps that would improve efficiency of India's markets welcome: US 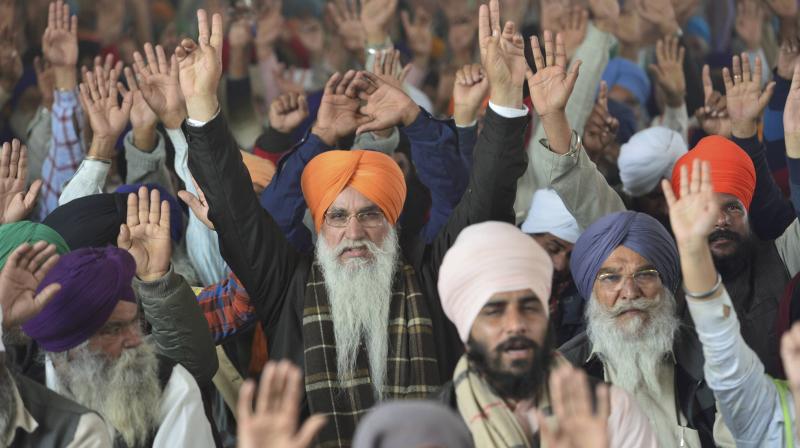 Washington: Recognising that peaceful protests are a hallmark of a thriving democracy, the US has said it welcomes steps that would improve the efficiency of India's markets and attract greater private sector investment.

The State Department, responding to a question on the ongoing farmers' protests in India, said on Wednesday the US encourages that any differences between the parties be resolved through dialogue.

Indicating that the new Biden administration is supportive of the Indian government's move to reform the agricultural sector that attracts private investment and greater market access to farmers, a State Department spokesperson said: "In general, the United States welcomes steps that would improve the efficiency of India's markets and attract greater private sector investment".

"We recognise that peaceful protests are a hallmark of any thriving democracy and note that the Indian Supreme Court has stated the same," the official said.

The Ministry of External Affairs (MEA) in New Delhi issued a statement on Wednesday to highlight that the Parliament of India had passed "reformist legislation" for the agricultural sector, which "a very small section of farmers" have some reservations about and therefore the laws have been kept on hold while talks are held.

Meanwhile, several American lawmakers came out in support of the farmers' protests in India.

In a statement, she encouraged the Indian government and representatives of the protesting farmers to engage in productive discussions.

"I will continue to monitor this situation closely. It has been particularly valuable to engage with stakeholders across the district on this topic and I remain appreciative to all who have reached out to share their perspective," Stevens said.

Another Congresswoman, Ilhan Omar, expressed solidarity with all the farmers protesting for their livelihood across India.

"India must protect their basic democratic rights, allow for the free flow of information, reinstate internet access and release all the journalists detained for covering the protests," she wrote on Twitter.

Referring to the farmers' protests, Meena Harris, niece of US Vice President Kamala Harris, alleged that the world's biggest democracy is under an assault.

"It's no coincidence that the world's oldest democracy was attacked not even a month ago, and as we speak, the most populous democracy is under assault. This is related. We ALL should be outraged by India's internet shutdowns and paramilitary violence against farmer protesters," she said in a tweet.

In a separate statement, Gurinder Singh Khalsa, chairman of the Sikhs Political Action Committee, said the "historic" farmers' protest is turning out to be the "biggest-ever revolution" against the Indian government's crony capitalism.

"This is the beginning of a movement for better accountability and transparency against crony capitalism. World was watching and now it has started reacting and mobilising in support of this historic revolution of Indian farmers. This will be bigger than India's freedom Revolution," Khalsa, who is based in Indiana, said.

India has called the remarks by foreign leaders and organisations on protests by farmers as "ill-informed" and "unwarranted", asserting that the matter pertains to the internal affairs of a democratic country.

Emphasising that the protests must be seen in the context of India's democratic ethos and polity, the MEA in its statement said some vested interest groups have tried to mobilise international support against the country.

"Before rushing to comment on such matters, we would urge that the facts be ascertained, and a proper understanding of the issues at hand be undertaken.

"The temptation of sensationalist social media hashtags and comments, especially when resorted to by celebrities and others, is neither accurate nor responsible," the MEA statement said following some high-profile celebrities tweeting over the agitation by the farmers.

Thousands of farmers, mainly from Punjab and Haryana, have been camping at several Delhi border points since November last year, demanding the government to repeal the three farm laws and legal guarantee of minimum support price (MSP) for their crops.

Defending the three contentious agri laws, the MEA said: "these reforms give expanded market access and provided greater flexibility to farmers. They also pave the way for economically and ecologically sustainable farming."

Recently, the International Monetary Fund (IMF) said India's new farm laws have the "potential to represent a significant step forward" for reforms in the agriculture sector.

"We believe the farm bills do have the potential to represent a significant step forward for agricultural reforms in India. The measures will enable farmers to directly contract with sellers, allow farmers to retain a greater share of the surplus by reducing the role of middlemen, enhance efficiency and support rural growth," IMF Communications Director Gerry Rice told reporters here last month.