US: Immigrants look for guardians in wake of deportation speculations

According to a study, there are about 5 mn children under the age of 18 are living with at least one parent who is in the country illegally. 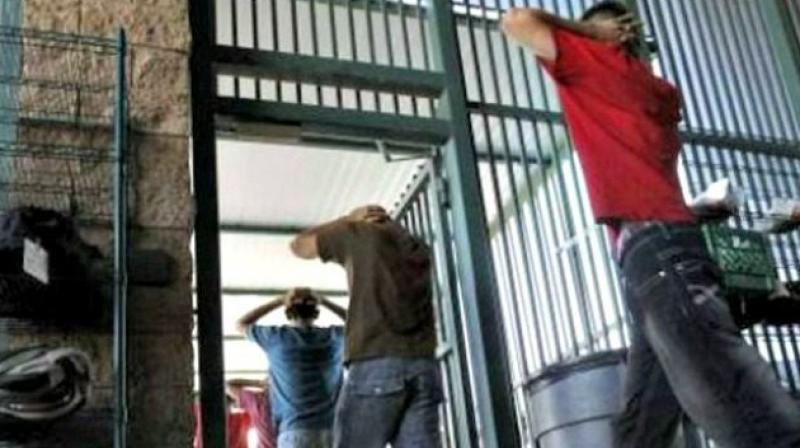 Illegal immigrants file into BC facility in Tucson. (Photo: AP)

San Francisco: From two requests a month for guardianship, to over 10 requests a month, the 'Trump' effect is now forcing parents to disassociate themselves with their children and pick guardians for them.

Parents who immigrated illegally to the United States now fear deportation under the Trump administration and are inundating immigration advocates with requests for help in securing care for their children in the event they are expelled from the country.

So how many of these children are there? According to a 2016 study by Migration Policy Institute, there are about five million children under the age of 18 are living with at least one parent who is in the country illegally, most of the children, 79 percent, were U.S. citizens.

The Coalition for Humane Immigrant Rights of Los Angeles (CHIRLA) advocacy group has been receiving about 10 requests a day from parents who want to put in place temporary guardianship for their children, said spokesman Jorge-Mario Cabrera. Last year, the group said it received about two requests a month for guardianship letters and notarization services.

At the request of a nonprofit organization, the National Lawyers Guild in Washington D.C. put out a call this week for volunteer attorneys to help immigrants fill out forms granting friends or relatives the right to make legal and financial decisions in their absence.

In New Jersey, immigration attorney Helen Ramirez said she is getting about six phone calls a day from parents. Last year, she said, she had no such calls."Their biggest fear is that their kids will end up in foster care," Ramirez said.

President Donald Trump's administration has issued directives to agents to more aggressively enforce immigration laws and more immigrants are coming under scrutiny by the authorities.

For parents of US citizens who are ordered removed, the U.S. Immigration and Customs Enforcement (ICE) agency "accommodates, to the extent practicable, the parents' efforts to make provisions" for their children, said ICE spokeswoman Sarah Rodriguez. She said that might include access to a lawyer, consular officials and relatives for detained parents to execute powers of attorney or apply for passports and buy airline tickets if the parents decide whether or not to take the children with them.

Randy Capps of the Migration Policy Institute (MPI), a Washington-based non-profit that analyzes the movement of people worldwide, said that while putting contingency plans in place is a good idea, he does not think the level of fear is justified.

During the previous administration of President Barack Obama, a Democrat, the likelihood of both parents being deported was slim, Capps said. He doubts there will be a huge shift under Republican Trump toward deporting both parents. "The odds are still very low but not as low as they were - and this is just the beginning of the administration," he said.

Obama was criticized for being the "deporter in chief" after he expelled more than 400,000 people in 2012, the most by any president in a single year. In 2014, the Obama administration began focusing on a narrower slice of immigrants, those who had recently entered the country or committed serious felonies. Trump has said he would still prioritize criminals for deportation.

'Worried all the time'

In rural New Jersey, Seidy Martinez and her husband Jose Gomez have begun the difficult conversations with their 10-year-old daughter about what would happen if her parents were deported.

Martinez, a house cleaner, and Gomez, who works on a horse farm, are both from Honduras. They entered the United States illegally, and do not have papers, unlike their daughter, who has been granted asylum, and their 3-year-old son, a U.S. citizen.

"Now we are worried all the time. We don't have anything that would allow us to stay here," said Martinez. "Our main concern is what will happen to our children."

She has told her daughter that she could live with her aunt in Miami and is considering drafting paperwork that would give her relative some legal rights if she and her husband are deported. The 10-year old tries to comfort her mother. "She tells me, 'Mami, tranquila. Don't be afraid, I am scared too but don't worry everything will be OK.'"

Rebecca Kitson, an immigration attorney in Albuquerque, New Mexico, says she advises her increasingly nervous clients to have the kind of conversations Martinez and her husband are having with their children.

She said she urges parents to be specific in their instructions. "If Mom doesn't come home by a specific time, who do [the kids] call?" said Kitson.

Immigration groups are offering low-cost services. CHIRLA, for example, offers a free sample letter and help filling it out, which then must be notarized at a cost of about $10. But some parents here illegally say they have had trouble finding affordable help.

Melvin Arias, 39, a New Jersey landscaper from Costa Rica who entered the United States illegally 13 years ago, said he decided after hearing news of stepped-up immigration enforcement to take legal precautions for his five-year-old son and six-month old daughter, who are both U.S. citizens.

But when he asked for help from two different lawyers, Arias was told preparing legal documents would cost him between $700 and $1,250. He is looking for a cheaper way to obtain the paperwork he needs.

"If there comes a time when both of us have a problem, I want there to be a responsible person who can come and get [the children] for us, to take them to wherever we might be," Arias said.