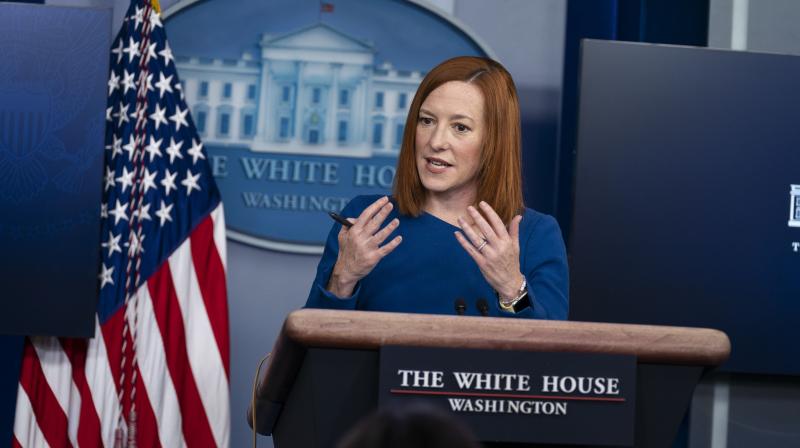 It lays out a vision for how the United States can seize what we view as a once-in-a-generation opportunity to renew America's advantages at home and abroad, White House Press Secretary Jen Psaki told reporters at her daily news conference. (AP/Evan Vucci)

Washington: The Biden Administration has said that by restoring US credibility and reasserting forward-looking global leadership, it will ensure that America, not a more assertive and authoritarian China, sets the international agenda, working alongside countries like India to shape new norms and agreements globally that advance its interests and reflect its values.

The comments were made in the Biden administration's Interim National Security Strategic Guidance released on Wednesday.

It lays out a vision for how the United States can seize what we view as a once-in-a-generation opportunity to renew America's advantages at home and abroad, White House Press Secretary Jen Psaki told reporters at her daily news conference.

The Guidance, she said, is designed to communicate the administration's strategic approach and central priorities for national security policy.

It describes the changed strategic landscape the US faces today and affirms our enduring core national interests, including protecting the security of the American people, expanding economic prosperity and opportunity, and realising and defending the democratic values at the heart of the American way of life, Psaki said.

In its interim National Security Guidance, the White House said that this agenda will strengthen its enduring advantages, and allow it to prevail in strategic competition with China or any other nation.

The most effective way for America to out-compete a more assertive and authoritarian China over the long-term is to invest in our people, our economy, and our democracy, it said.

By restoring US credibility and reasserting forward-looking global leadership, we will ensure that America, not China, sets the international agenda, working alongside others to shape new global norms and agreements that advance our interests and reflect our values.

"By bolstering and defending our unparalleled network of allies and partners, and making smart defense investments, we will also deter Chinese aggression and counter threats to our collective security, prosperity, and democratic way of life, the Guidance said.

Reiterating that the US will reinvigorate and modernise its alliances and partnerships around the world, the Guidance said that beyond its core alliances, the US will also double down on building partnerships throughout the world, because its strength is multiplied when it combines efforts to address common challenges, share costs, and widen the circle of cooperation.

As we do, we will recognise that our vital national interests compel the deepest connection to the Indo-Pacific, Europe, and the Western Hemisphere. And we will be mindful of both our values and our interests as we engage partner nations.

"We will deepen our partnership with India and work alongside New Zealand, as well as Singapore, Vietnam, and other Association of Southeast Asian Nations (ASEAN) member states, to advance shared objectives. Recognising the ties of shared history and sacrifice, we will reinforce our partnership with Pacific Island states, the Guidance said.

At its root, the White House said that ensuring national security requires them to defend and nurture the underlying sources of American strength, including its people, economy, national defence, and democracy at home; promote a favourable distribution of power to deter and prevent adversaries from directly threatening the US and its allies, inhibiting access to the global commons, or dominating key regions; and lead and sustain a stable and open international system, underwritten by strong democratic alliances, partnerships, multilateral institutions, and rules.

It said that the US will position itself, diplomatically and militarily, to defend its allies.

We will support China's neighbours and commercial partners in defending their rights to make independent political choices free of coercion or undue foreign influence. We will promote locally-led development to combat the manipulation of local priorities, said the Guidance.

We will support Taiwan, a leading democracy and a critical economic and security partner, in line with longstanding American commitments. We will ensure that US companies do not sacrifice American values in doing business in China. And we will stand up for democracy, human rights, and human dignity, including in Hong Kong, Xinjiang, and Tibet. On all these issues, we will work to forge a common approach with like minded countries, it said.

The relations between the US and China are at an all-time low. The two countries are currently engaged in a bitter confrontation over various issues, including trade, the origins of the novel coronavirus pandemic, the communist giant's aggressive military moves in the disputed South China Sea and human rights violations.

At the same time, the White House recognises that strategic competition does not, and should not, preclude working with China when it is in its national interest to do so.

Indeed, renewing America's advantages ensures that we will engage China from a position of confidence and strength. We will conduct practical, results-oriented diplomacy with Beijing and work to reduce the risk of misperception and miscalculation, it said.

We will welcome the Chinese government's cooperation on issues such as climate change, global health security, arms control, and nonproliferation where our national fates are intertwined. As we do, we will rally our allies and partners to join us, pooling our negotiating leverage and showing our collective power and resolve, the Guidance said.