Donald, Melania Trump dine with British Royals, here's what was on menu 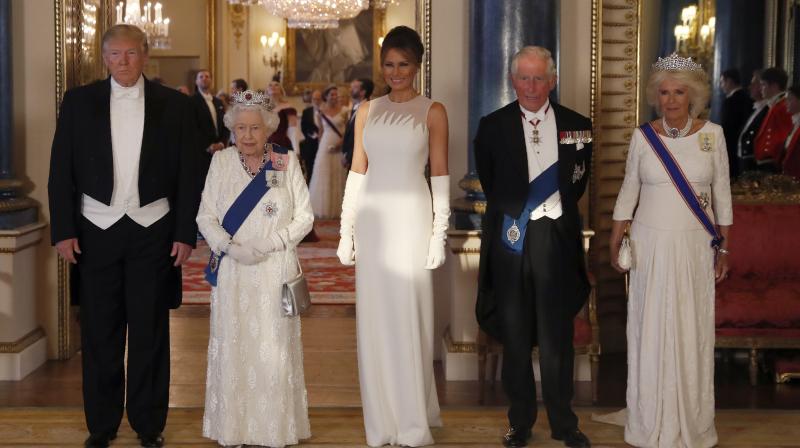 Queen Elizabeth II recited a warm speech eulogizing the relationship between the two nations and added that she was 'delighted to welcome' President Trump to the Palace. (Photo: AP)

Washington: US President Donald Trump along with his wife Melania Trump met the royal family and other British politicians on Monday night for the state dinner at Buckingham Palace.

Trump sat beside the Duchess of Cornwall among a total of 170 guests. Steamed filet of halibut, new Windsor lamb, strawberry sable with lemon verbena cream, fresh fruit and coffee and petit fours, were served for the dinner, reported E! News.

Queen Elizabeth II recited a warm speech eulogizing the relationship between the two nations and added that she was "delighted to welcome" President Trump to the Palace."American Presidents always remind us of the close and longstanding friendship between the United Kingdom and the United States, and I am so glad that we have another opportunity to demonstrate the immense importance that both our countries attach to our relationship," the Queen said.

She continued her speech and said, "President, as we look to the future, I am confident that our common values and shared interests will continue to unite us. Tonight we celebrate an alliance that has helped to ensure the safety and prosperity of both our peoples for decades, and which I believe will endure for many years to come."

On their three-day official visit to the UK, the Trumps earlier on Monday were welcomed for a State Banquet hosted by Queen Elizabeth II. Duke and Duchess of Cambridge, Prince William and Kate Middleton, Prince Charles, Camilla, Duchess of Cornwall, PM Theresa May, Treasure Secretary Steve Mnuchin and many others joined in.

Donald and Melania Trump were accompanied by their children- Ivanka, Donald Trump Jr., Tiffany and Eric Ivanka and Eric were present with their partners Jared Kushner and Lara Trump, respectively.

Duke of Sussex, who became a father in early May, met the Trumps at the Buckingham Palace. Duchess of Sussex, Meghan Markle who is on maternity leave, wasn't present at the event.