James said every voter must be able to exercise his fundamental right to vote without being harassed, coerced or intimidated 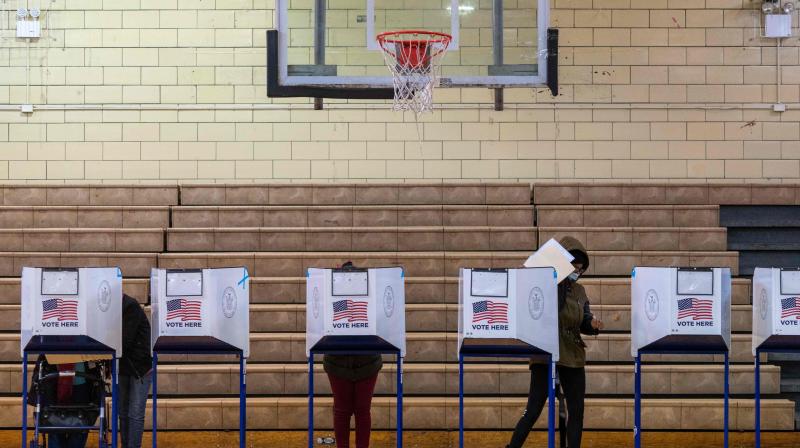 A voter fills out their ballot at Mitchel Community Center on November 3, 2020 in the Bronx borough of New York City. After a record-breaking early voting turnout, Americans head to the polls on the last day to cast their vote for incumbent U.S. President Donald Trump or Democratic nominee Joe Biden in the 2020 presidential election. David Dee Delgado/Getty Images/AFP

"Attempts to hinder voters from exercising their right to cast their ballots are disheartening, disturbing and wrong. What's more is that it is illegal and will not be tolerated." James said every voter must be able to exercise his fundamental right to vote without being harassed, coerced or intimidated.

"Our nation has a legacy of free and fair elections and this election will be no different. Voters should be rest assured that voting is safe and secure, and they should exercise their fundamental right to vote in confidence," she said, adding that state leaders across the nation are working hard to protecting "your right to vote and anyone who tries to hinder that right will be held accountable to the fullest extent of the law".

Earlier this week, the Office of the Attorney General issued subpoenas to investigate the source of these robocalls allegedly spreading disinformation. James also issued an alert to New Yorkers who voted by absentee ballots to inform them of their rights under New York state's new "notice and cure" law.

The law states that voters must be notified if their absentee ballots are being rejected for certain errors they might have made in filling out their ballots. The voters must also be given an opportunity to fix such errors within an allotted time period.

"With the record number of first-time absentee ballots, we hope this information proves useful to voters who may need to fix an inadvertent error with their ballots," James said. She also announced a major victory for voters across the nation in the effort to ensure that every ballot cast in the US presidential election is counted.

Judge Emmet Sullivan of the US District Court for the District of Columbia issued a minute-order in which he instructed the United States Postal Service (USPS) to immediately send postal inspectors or inspectors from the USPS Office of Inspector General to post offices in various cities and states across the country to sweep for any ballots that have yet to be delivered and send them out immediately.

"This is a major win for all Americans," James said. "Our democracy is at its strongest when every voice is heard. This order will ensure that the will of the people decides the outcome of this election, not the Trump administration." In August, James led a coalition of states and cities from across the country in filing a lawsuit to stop the Trump administration's attempts to dismantle the USPS. The slowdown is already having life-threatening impacts on veterans and seniors who are not receiving medication, as well as economic impacts on individuals waiting for pension checks and paychecks.

As the United States neared Tuesday's presidential election, the USPS was also expected to handle a record number of mail-in ballots because of the COVID-19 pandemic.