No one was injured in the incident, said Johnna Batiste of Washington State Patrol, sharing pictures of the plane and a video of landing. 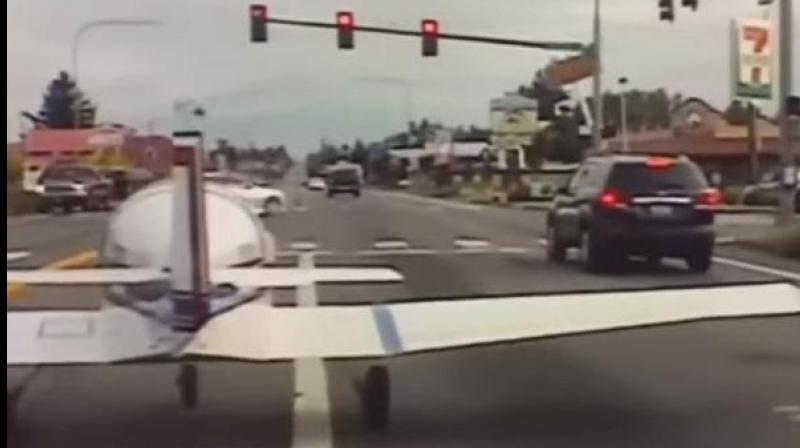 A small plane was landed on a busy stretch of road in Washington on Thursday, shocking commuters. (Photo: AP/ video screengrab)

Washington: A small plane was landed on a busy stretch of road here on Thursday, shocking commuters. The incident took place at around 8.15 am as the single-propeller KR2 aircraft made an emergency landing on Pacific Avenue South after experiencing a fuel system malfunction, authorities say.

The pilot of a small plane frightened motorists when he made an emergency landing on a Washington State highway. He even stopped the plane at a red light.

WATCH: A small plane makes an emergency landing on a Washington highway.pic.twitter.com/oppxPIxaLz

The terrifying moment was caught on the dashboard camera of State Trooper Clint Thompson who followed the plane. Thompson had initially thought that the plane was remote-controlled, however, when the plane got bigger, he realised that the pilot was going to land it on the road.

The dashcam footage shows the plane flying very close to the ground and then makes an emergency landing on the road and comes to a stop at a red light. The dramatic video shows the plane landing just before an intersection.

The police later learned that the single-prop aircraft had a fuel system malfunction due to which the pilot, David Acklam had to make the landing.

"Essentially, what happened is the pilot was supposed to make an emergency landing because he was having a fuel system malfunction," Trooper Johnna Batiste, a spokesperson for the state police, said. "Lucky for him and lucky for our trooper it worked out safely for everyone."

No one was injured in the incident, said Johnna Batiste of the Washington State Patrol, sharing pictures of the plane and a video of the landing.

The spokesperson said that Acklam was "relatively calm" and was more worried about getting in trouble with the authorities, however, he was not charged by the police.

The video that has gone viral on social media has received some praises for the pilot's skillful landing, while others cracked jokes.

Pilot did a great job in an emergency situation. No one expects to see a plane landing towards them, never know whats going to happen next?

Beyond belief. There are no words. Impressive job completed in the sky and on the ground. So thankful all are safe. I cannot help but wonder how many guardian angels intervened as well. The impossible, made possible, all captured in this video!

“May I see you license and registration, please?”