The new system, which was put on hold earlier this year, is expected to come into force for next application cycle beginning April 1, 2020. 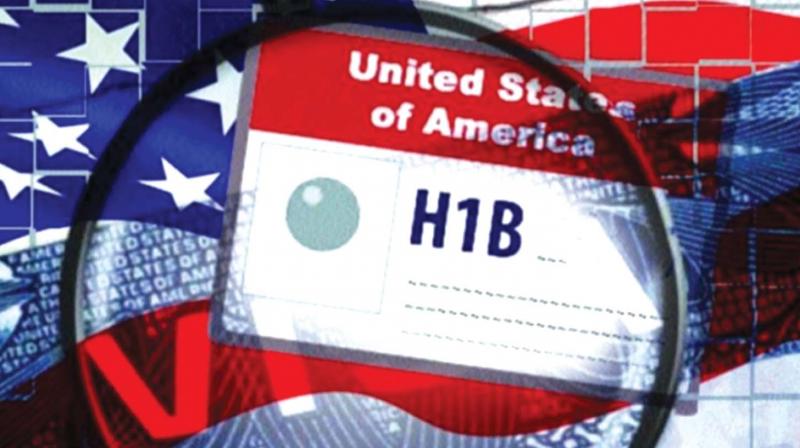 The H-1B visa is a non-immigrant visa that allows US companies to employ foreign workers in speciality occupations that require theoretical or technical expertise. (Photo: File)

Washington: A federal US agency on Wednesday proposed USD 10 fee for the registration of new H1-B visas, offsetting costs incurred in the process.

The H-1B visa is a non-immigrant visa that allows US companies to employ foreign workers in speciality occupations that require theoretical or technical expertise.

The technology companies depend on it to hire tens of thousands of employees each year from countries like India and China The proposed fee is part of the new registration process for companies wishing to apply for the temporary employment visa.

The new system, which was put on hold earlier this year, is expected to come into force for the next application cycle beginning April 1, 2020.

Once the US Citizenship and Immigration Services (USCIS) implements the new system, it will not consider the H-1B cap-subject petition unless it is based on a valid registration selection for the applicable fiscal year, a federal notification said.

According to the notification, the Department of Homeland Security (DHS) is proposing the USD 10 fee for each registration for the H-1B cap selection process.

Accordingly, the proposed fee would generate USD 1,929,180 in revenue, it said.
The DHS regulations require petitioners seeking to file H-1B petitions subject to the regular cap, including those eligible for the advanced degree exemption, to first electronically register with the USCIS during a designated registration period, unless the registration requirement is suspended.

When registration is required, an H-1B cap-subject petition must be based on a selected registration for the named beneficiary for the applicable fiscal year to be considered properly filed, it said.

The DHS is proposing the fee for submitting H-1B registrations to recover those costs, it added.

The federal notification said the DHS estimates H-1B registration will save an estimated USD 1.6 million annually.

The USCIS will, however, have to spend a total of about USD 1.5 million on the initial development of the registration website.

This will be a one-time cost, it said.

The federal government said a USD 10 registration fee adheres to the ability-to-pay-principle because H-1B petitioners have demonstrated an ability and willingness to incur significant filing fees to petition for H-1B non-immigrant workers.

In addition to the filing fee, certain H-1B petitions may have to pay up to USD 6,000 in statutory fees.

The USCIS does not keep most of the revenue.

The US Customs and Border Protection receives 50 per cent of the USD 4,000, 9-11 Response and Biometric Entry-Exit fee and the remaining 50 per cent is deposited into the General Fund of the Treasury.

Further, the USCIS retains five per cent of the USD 1,500 or USD 750 American Competitiveness and Workforce Improvement Act (ACWIA) fee.
The remainder goes to the Department of Labor and the National Science Foundation.

These statutory fees are in addition to the current Form I-129 fee of USD 460 and optional premium processing fee of USD 1,410.

“Given the significant amount of fees H-1B petitioners already incur, the DHS believes that the proposed USD10 registration fee is ‘de minimis’ and consistent with the ability-to-pay-principle,” the federal notification said.