Trump and Melania were proceeding to board Marine One as they were set to travel to Ohio from the White House. 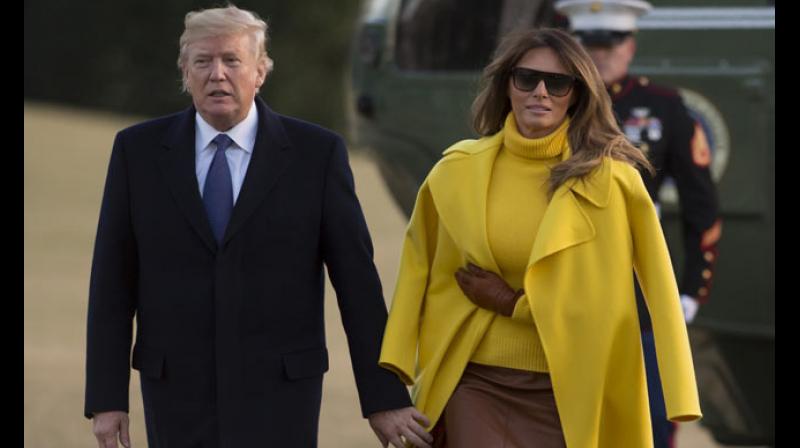 Melania’s long yellow overcoat is deceivingly draped over her shoulders leading the President to mistakenly grab her sleeves instead of her hand. (Photo: AFP)

In a video that is reminiscent of May 2017, US President Donald Trump fumbles awkwardly as he tries to hold First Lady Melania Trump’s hand and fails, yet again.

Needless to say the video has gone viral taking the internet by a rib-tickling storm.

Trump and Melania were proceeding to board Marine One as they were set to travel to Ohio from the White House.

The video shared by NBC News shows the two walking towards the aircraft. Melania’s long yellow overcoat is deceivingly draped over her shoulders leading the President to mistakenly grab her sleeves instead of her hand.

Trump makes several uncomfortable attempts to hold the First Lady’s hand and the awkward moment slides as they continue towards the aircraft.

Why the hell doesn't this women put her arms in the coat sleeves?

why can't this woman ever wear a coat properly? For gawd's sake just wear a damn cape if you want to wear it this way. #pretentious

Some even went so far as to project the whole incident as a deliberate move by the First Lady.

Ha! Ha! But for about 5 seconds he had her hand! Then she blocks his move and she gains control again. WooHoo Melania 1 trump 0

Awesome. She made her bed years ago as his mistress, now she’s clearly nauseated just being near him. She’s stuck and I’m thrilled

I figured it out! She won’t use sleeves because she doesn’t want him to reach for her hand

Apparently @flotus does everything in her power to avoid body contact. Wearing the coat over her shoulders is a sure sign.