World   Americas  06 May 2019  Trump keeps pressure on China in do or die trade talks
World, Americas

Trump keeps pressure on China in do or die trade talks

US President Donald Trump that the United States will raise tariffs on USD 200 billion of Chinese goods -- a blunt warning to Beijing. 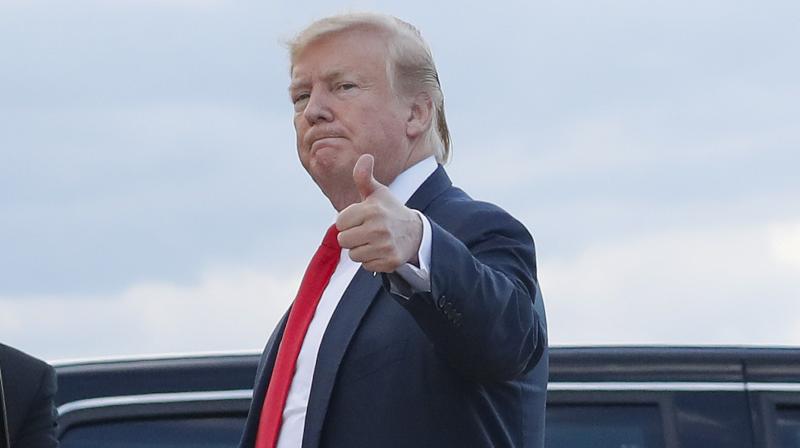 Trump said he is raising some tariffs because the trade talks are going too slowly. (Photo:AP)

Washington: US President Donald Trump announced Sunday that the United States will raise tariffs on USD 200 billion of Chinese goods -- a blunt warning to Beijing just days before what is being billed as a last-ditch round of talks to reach a deal or resume their trade war.

To press China even more to accept US demands, Trump also threatened again to slap tariffs on all Chinese imports to the US -- worth USD 539.5 billion last year.

The next round of talks with a major Chinese delegation is scheduled to start Wednesday in Washington.

Trump said he is raising some tariffs because the trade talks are going "too slowly."

The two sides have imposed tariffs on USD 360 billion in two-way trade since last year. But Trump and Chinese leader Xi Jinping agreed to a truce in December to refrain from further escalation.

As recently as last week, the US had depicted the trade talks as going well.

"The Trade Deal with China continues, but too slowly, as they attempt to renegotiate. No!" Trump complained.

Trump says he wants to reduce the huge US trade deficit with China, which in 2018 totaled USD 378.73 billion with services trade included.

Besides a greater opening of the Chinese market to US goods, Trump is pressing for structural changes such as Beijing ending its practice of forcing US companies that operate in China to share their technology.

The US president has insisted throughout the process that he will not accept a watered-down trade accord. And his administration warned recently that trade talks could not simply go on forever.

The next round of talks could see Trump announcing a summit with President Xi Jinping to sign a trade accord with a potentially historic scope, or the trade war could resume and worsen.

For now, the Trump administration insists that the trade hard has left US economy unscathed, unlike the Chinese economy, which last year posted its slowest growth in nearly 20 years.

Trump asserted that so far the tariffs he slapped on Chinese goods "are partially responsible" for the robust US economy, which in the first quarter grew at an annual rate of 3.2 percent.

But many economists are worried about the longer term effects on the US economy.

Some US manufacturers who import Chinese products that are subject to tariffs are already complaining of higher costs. And economists warn that US consumers will end up paying more for everyday items.

China's lead negotiator, Vice Premier Liu He, and his people are expected to arrive in Washington on Wednesday.

So far, the Chinese side in the talks has agreed for China to buy more US products, mainly in the farm and energy sectors.

But one major obstacle to reaching a final deal continues to be a mechanism for enforcing any accord that is agreed upon.

The Trump administration says it has seen promises and commitments ignored in the past, so this time it will not sign a deal unless it features measures that will allow Washington to verify that China is keeping its word.

Beijing is pressing for the US to lift the tariffs it has imposed, which Washington is evidently not willing to do.

Vice President Mike Pence said Friday that Trump is prepared to impose even more tariffs if no deal is reached.

"The manner in which tariffs would come off is going to be a part of the enforcement mechanism and all of that is the subject of negotiations as we talk," Pence told CNBC.

Trump's chief negotiator, Robert Lighthizer, told the Senate Finance Committee in March that America must keep open the option of raising tariffs on Chinese imports as a way to be sure China complies with the trade deal the two sides are working to complete.