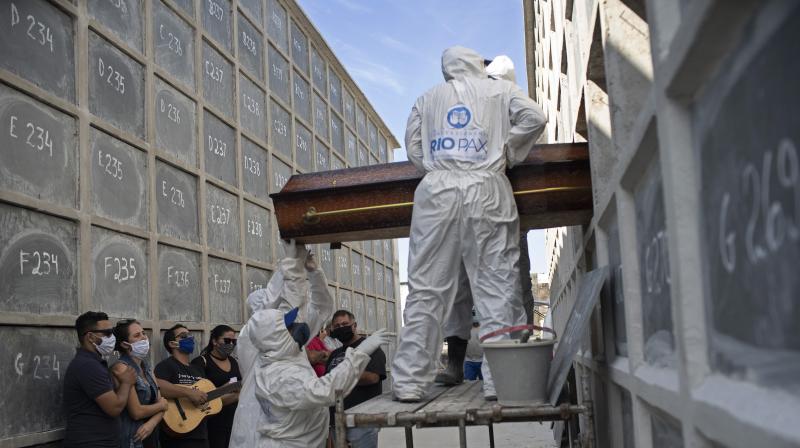 Family members watch as cemetery workers place into a niche a coffin with the remains of person suspected to have died from coronavirus, in Rio de Janeiro, Brazil. (AP)

Brasilia: Brazil, one of the world’s emerging coronavirus hot spots, registered a record number of cases and deaths on Wednesday, prompting the health minister to flag the possibility of strict lockdowns in particularly hard-hit areas.

There are over 100,000 completed coronavirus tests that still have not been registered in the national database, health ministry sub secretary Wanderson Oliveira warned, meaning case numbers could rise steeply in the coming days.

Health Minister Nelson Teich told a press conference an increasing number of local authorities may have to institute “lockdowns,” as the coronavirus growth curve does not appear to be flattening.

The prosecutors, who have significant independent powers in Brazil, said they had forwarded the report to the governor’s office and the mayor of Rio, the state’s eponymous capital city, raising the chance of a lockdown in Brazil’s third-largest state.

While authorities have ordered non-essential services and businesses closed in most states, Rio residents are still allowed to circulate. A lockdown, which so far has only been implemented in the northeastern city of Sao Luis, prohibits people from leaving their homes except for necessary activities.

Still, Teich said, some areas of the country that had not borne the brunt of the pandemic may be able to consider gradually opening up.

As part of Brazil’s bid to combat the coronavirus outbreak, officials said they were attempting to dramatically ramp up testing capacity from the current 2,700 tests per day.

“At the most elevated level of (test) production, which we think we’ll get to in the middle of July, we’ll get to 70,000 per day,” Oliveira said.