‘Police violence and racism are a public health emergency’, read the signs as thousands of doctors, nurses marched on 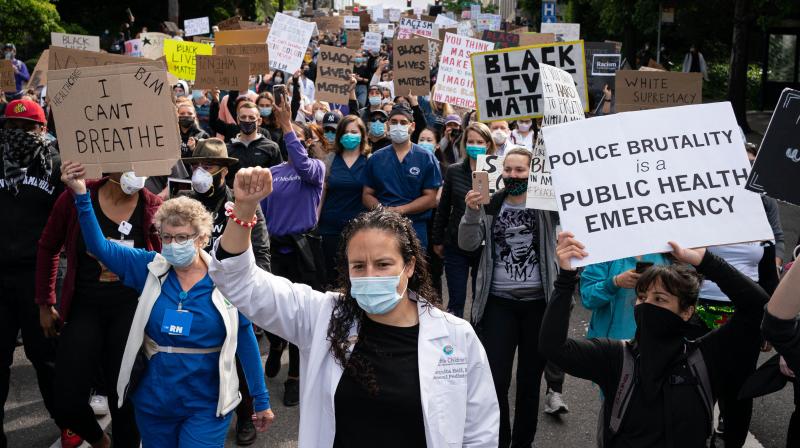 Healthcare workers and others march to Seattle City Hall during the Doctors For Justice event on June 6, 2020 in Seattle, Washington. (AFP)

Seattle: Saturday marked a ninth consecutive day of protests in Seattle over the death of George Floyd, with a large crowd of medical workers demonstrating against racism and police brutality.

Thousands of doctors, nurses and others — many in lab coats and scrubs, in addition to face masks — marched from Harborview Medical Center to City Hall on Saturday. One sign said, “Nurses kneel with you, not on you.” Another said, “Police violence and racism are a public health emergency.”

Nhi Tan, a medical student at the University of Washington, told The Seattle Times she joined the demonstration out of “overwhelming sadness.”

Crowds also demonstrated in other parts of the city and throughout the state, with protests held in Shoreline, Bellingham and elsewhere.

Seattle Mayor Jenny Durkan said Saturday she is encouraging protesters to be tested for COVID-19, after the city and King County public health departments expanded testing criteria to cover asymptomatic people who have attended large protests.

“Over the last week, residents across Seattle have been gathering to build community and share their anger and frustration about the killing of George Floyd and injustices against black Americans, here in Seattle and across the country,” Durkan said in a written statement. “While I believe everyone should exercise their right and speak out, we must also remember we’re in the middle of a pandemic.”

Protesters have gathered across the U.S. and around the world to demonstrate against the death of Floyd, a handcuffed black man who died after pleading for air as a white Minneapolis police officer pressed his knee on Floyd’s neck.

The demonstrations in Seattle have been among the largest the city has seen in years. After police were severely criticized by protesters and public officials alike for using tear gas and pepper spray to disperse largely peaceful crowds, Durkan and Police Chief Carmen Best on Friday imposed a 30-day moratorium on the department’s use of one kind of tear gas.

During that time, the Community Police Commission, the Office of Police Accountability and the Office of Inspector General for Public Safety will review and update crowd-control policies, including the use of pepper spray and deadly force techniques such as neck and choke holds, Best said. She and the mayor added that the ban could be extended if groups need more time for policy review.

The city last week also addressed other concerns of the protesters, lifting its curfew and forbidding officers who work the protests from covering up their badge numbers.

The protests in recent days have been more peaceful than last weekend, when small groups engaged in rioting and looting. The police have also been more restrained.

“I think the last two days have shown that you can have very large demonstrations in two parts of the city and that they can be conducted in peace and without any confrontations with police,” Durkan said.