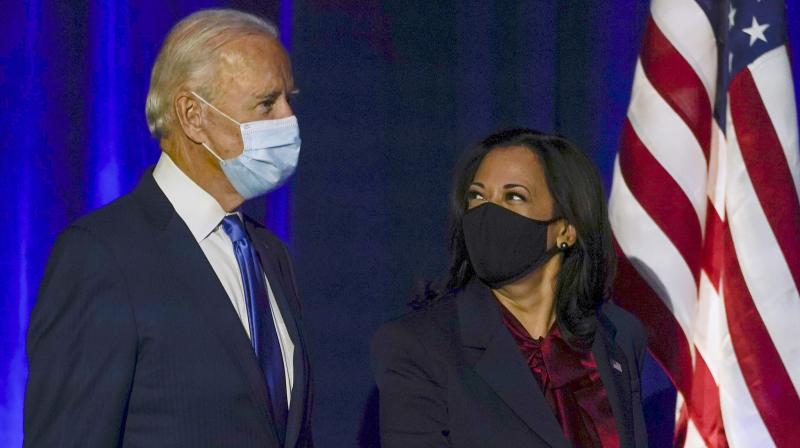 Wilmington: Joe Biden, inching closer to victory after a bitter presidential election, appealed Friday to Americans to turn the page on divisions as a seething Donald Trump warned him not to declare victory.

As trickling returns from Pennsylvania and three other states made Trump's path to a second term increasingly unlikely, Biden repeated that he believed he would win but said he would wait for the process to complete.

Instead, Biden delivered a late-night address with the tone of a president-elect and vowed to tackle the Covid-19 pandemic as new cases Friday hit a new high of more than 127,000 cases.

"We must put the anger -- and the demonization -- behind us. It's time for us to come together as a nation and heal," Biden said in his home city of Wilmington, Delaware accompanied by his running mate, Senator Kamala Harris.

"My responsibility as president will be to represent the whole nation," he said, drawing a stark contrast with Trump's nearly four years of rule by provocation.

Biden spoke as US media began reporting that White House chief-of-staff Mark Meadows, 61, had contracted the virus -- underscoring the criticism directed at the president for months over his administration's handling of the crisis.

Meadows first tested positive on Wednesday, a day after the election, according to The New York Times.

Biden said he and Harris had already been meeting experts on how to control the "skyrocketing" cases of Covid-19, which has claimed more than 230,000 lives in the United States, more than in any other country.

"I want everyone to know that on Day One, we are going to put our plan to control this virus into action, Biden said.

"That can't save any of the lives that have been lost, but it will save a lot of lives in the months ahead."

After Biden's campaign said he would address the nation, speculation grew that he would make a formal declaration of victory but he appeared to be waiting for confirmation of an unassailable lead and said he would speak again Saturday.

Biden's lead grew inexorably in Pennsylvania, which would hand him the keys to the White House if he secures its 20 votes in the Electoral College that determines presidential races.

By late Friday he had an advantage of almost 29,000 votes over Trump, although that was still within the narrow margin that would likely trigger a recount.

Biden was also ahead in Arizona and Georgia -- two states that have not voted for Democrats in the 21st century -- as well as Nevada, while Trump held a slim lead in North Carolina.

Georgia said it was ordering a recount due to the narrow margin and the southern state will also have runoff races in January for both its Senate seats, which will likely determine if Democrats wrest control of the upper chamber and give Biden a wider path to legislative victories.

Trump has several times prematurely named himself the winner, refusing to accept the data showing Biden headed for victory.

In his latest broadside, he warned on Twitter that "Joe Biden should not wrongfully claim the office of the President. I could make that claim also."

Trump's campaign has filed lawsuits around the country alleging fraud but made little headway, with no evidence produced to back up supposed ballot tampering or other significant incidents.

Pennsylvania Republicans made a last-ditch pitch for emergency intervention by the US Supreme Court to halt vote counting in the state as late ballots went to Biden.

Justice Samuel Alito, considered a conservative, declined to order an immediate halt but said the full court would consider the challenge on Saturday.

In another tweet, Trump complained that he had "such a big lead" on election night, "only to see the leads miraculously disappear" later in the week.

Trump has now said falsely several times that ballots are being either invented for Biden or stolen from him.

But the unprecedented attacks on US election integrity by a president ignore a simple fact about the different types of ballots cast.

Votes cast in person on Election Day and counted first largely favored Trump, who has questioned mail-in ballots and actions to halt Covid-19.

Later counting turned to the avalanche of votes mailed in by Americans who did not want to go to crowded polling stations in the middle of the coronavirus pandemic -- disproportionately Biden voters.

As Trump unleashed his offensive, his supporters vented anger outside election offices in several cities.

The protests were largely peaceful but in Philadelphia, prosecutors said they were charging two men who drove with weapons to the convention center where votes are being tabulated.

In Atlanta, an election worker went into hiding after facing death threats, with his car's license plate number exposed on the internet, after he was falsely accused of throwing out a ballot.

The worker was seen on video tossing a sheet, which was in fact an instruction sheet mailed back by a voter, said Richard Barron, Fulton County's elections supervisor.

Most of Trump's Republican Party stood squarely behind him.

"Far from over," tweeted Representative Kevin McCarthy, the leader of the Republican minority in the House of Representatives. "Republicans will not back down from this battle."

But several Republicans voiced alarm at the unprecedented attacks by a president on the US electoral process.

Senator Mitt Romney of Utah, the only Republican member of the Senate to vote to convict the president at his impeachment trial earlier this year, said Trump's charge of a stolen election "damages the cause of freedom here and around the world, weakens the institutions that lie at the foundation of the Republic, and recklessly inflames destructive and dangerous passions," Romney said.

Republican strategist Karl Rove, who helped George W. Bush to victory in the 2000 race eventually decided by the US Supreme Court, said fraud involving hundreds of thousands of ballots nationwide would "require a conspiracy on the scale of a James Bond movie."