The FBI is leading the investigation, as authorities did not rule out the possibility of it being a terrorist attack. 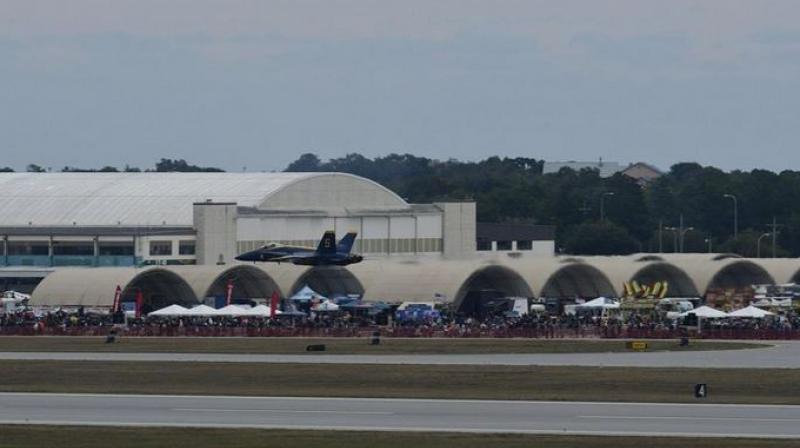 President Donald Trump expressed shock and grief at the incident and said he was personally monitoring the situation at the Naval Air Station Pensacola, that employs more than 16,000 military personnel and 7,400 civilians. (Photo: Facebook)

Washington: A Saudi Air Force trainee opened fire at a US naval station in Florida on Friday, killing three people before being shot dead by police, officials said.

The shooting at the Naval Air Station Pensacola also left eight, including two sheriff deputies, injured. Authorities did not rule out the possibility of it being a terrorist attack.

President Donald Trump expressed shock and grief at the incident and said he was personally monitoring the situation at the Naval Air Station Pensacola, that employs more than 16,000 military personnel and 7,400 civilians.

Authorities have not released the name of the shooter, but multiple news outlets reported that the alleged shooter was believed to be a Saudi national and was undergoing training at the base.

Eight injured people were taken to a nearby hospital. "Just received a full briefing on the tragic shooting at NAS Pensacola in Florida, and spoke to" Florida Governor Ron DeSantis, Trump said in a tweet. "My thoughts and prayers are with the victims and their families during this difficult time. We are continuing to monitor the situation as the investigation is ongoing," he said.

Trump also said in a tweet Friday afternoon that King Salman of Saudi Arabia called him to express his condolences and give sympathies to the families and friends of the warriors who were killed and wounded in the attack.

He was reportedly on training in the US and used a handgun in the attack, according to Escambia County Sheriff David Morgan.

The FBI is leading the investigation, as authorities did not rule out the possibility of it being a terrorist attack.

According to local law enforcement officials, it all started around 6.50 in the morning when reports of a gunfire at the naval base came and two county sheriff deputies rushed to the scene.

The two were injured in exchange of fire. While one received a gunshot in the arm, the other was hit in his leg. Both had to undergo surgery. Six other people were injured too.

Police said shooting took place in a two-floor classroom building at the base. "Saddened to hear of the horrible shooting at Naval Air Station Pensacola & continuing to monitor the situation. Praying for the victims & their families & we commend the first responders for their swift action in taking down the shooter & getting those on base to safety," Vice President Mike Pence tweeted.

"This is a dark day for a very great place," said the Florida Governor. Acting Secretary of the Navy Thomas B. Modly described this as a "crime against all of us".

"Our entire Navy and Marine Corps team is struck and deeply saddened by the attacks within our own naval family over the past several days, at Little Creek, Virginia last week, Pearl Harbor, Hawaii on Wednesday, and today in Pensacola, Florida. These acts are crimes against all of us, he said.