All Max jets will have the alert as standard equipment before returning to service, and newly built planes will have it too, Johndroe said. 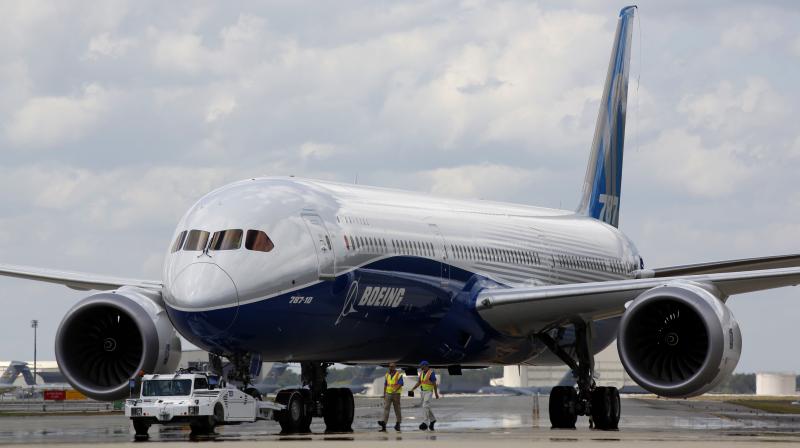 Boeing planned to wait three years to fix a non-working safety alert on its 737 Max aircraft and sped up the process only after the first of two deadly crashes involving the planes. (Photo: File)

Washington: Boeing planned to wait three years to fix a non-working safety alert on its 737 Max aircraft and sped up the process only after the first of two deadly crashes involving the planes.

The company acknowledged that it originally planned to fix a cockpit warning light in 2020 after two key lawmakers disclosed the company's timetable on Friday.

Peter DeFazio of Oregon and Rick Larsen of Washington wrote to Boeing and the Federal Aviation Administration and asked why the company took more than a year to tell the safety agency and airlines that the alert did not work on Max jets.

The feature, called an angle of attack or AoA alert, warns pilots when sensors measuring the up-or-down pitch of the plane's nose relative to oncoming air might be wrong. The sensors malfunctioned during a Lion Air flight in Indonesia in October and an Ethiopian Airlines flight from Addis Ababa in March, causing anti-stall software to push the planes' noses down.

Pilots were unable to regain control, and both planes crashed. In all, 346 people were killed. It is not clear whether either crash could have been prevented if the cockpit alert had been working.

A Boeing spokesman said that based on a safety review, the company had originally planned to fix the cockpit warning when it began delivering a new, larger model of the Max to airlines in 2020. "We fell short in the implementation of the AoA Disagree alert and are taking steps to address these issues so they do not occur again," said the spokesman, Gordon Johndroe.

All Max jets will have the alert as standard equipment before returning to service, and newly built planes will have it too, Johndroe said. Boeing delivered about 370 of the planes before they were grounded around the world in March.

Both Boeing and the head of the FAA say that the alert is not critical for safety. Boeing says all its planes, including the Max, give pilots all the flight information — including speed, altitude and engine performance — that they need to fly safely.

The pilots' union at American Airlines expressed unhappiness about the matter, however, and said Boeing's assurance about the cockpit alert was a factor in the union standing behind Boeing after the first Max crash, in October.

Jason Goldberg, an American Airlines pilot and union spokesman, said Boeing told pilots that the alert could pinpoint a faulty sensor even on the ground, before takeoff. "That is one of the things that made us confident initially to make the statement that we were happy to continue to fly the aircraft," he said.

"It turned out later that that wasn't true." Boeing admitted in May that within months of the plane's 2017 debut, engineers realised that the sensor warning light only worked when paired with a separate, optional feature.

Boeing is revising its software, called MCAS, so that it will rely on readings from two sensors instead of one, and will be easier for pilots to overcome if it malfunctions. It is unclear when the FAA will approve the changes and allow the Max to fly again.

Regulators in other countries could take longer. DeFazio and Larsen are leaders of a House committee that is investigating the crashes and the FAA's regulation of Boeing. They said Friday that Boeing decided in November 2017 to defer a software update to fix the sensor alert feature until 2020 but accelerated that timeline after the Lion Air crash.

Larsen questioned why Boeing didn't consider the problem critical to safety. The FAA on Friday repeated a statement it made last month that Boeing briefed the agency's Seattle office about the non-working alert in November, and the matter was forwarded to an FAA review board which considered the matter to be "low risk."

Last month, acting FAA Administrator Daniel Elwell told DeFazio's and Larsen's committee that he wasn't happy Boeing waited 13 months to tell the agency about the problem. "We will make sure that software anomalies are reported more quickly," he said.