Tillerson ‘dumb as a rock, lazy as hell’: Trump after ex-State Secy criticism

Trump on the same day praised Secretary of State Mike Pompeo for doing a great job. 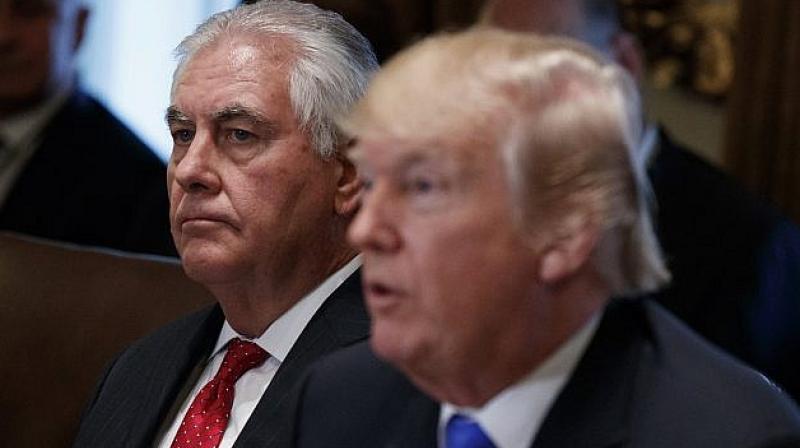 ‘I think he grew tired of me being the guy everyday that told him, 'You can't do that, and let's talk about what we can do,'’ Tillerson said. (Photo: File | AP)

Washington: US President Donald Trump on Friday lambasted his former secretary of state Rex Tillerson, describing him as "dumb as a rock" and "lazy as hell", after the ex-diplomat alleged the president regularly pushed him to take decisions that were "illegal".

On the same day, Trump praised Secretary of State Mike Pompeo for doing a great job.

"Mike Pompeo is doing a great job, I am very proud of him. His predecessor, Rex Tillerson, didn't have the mental capacity needed," Trump said in a tweet.

"He (Tillerson) was dumb as a rock and I couldn't get rid of him fast enough. He was lazy as hell. Now it is a whole new ballgame, great spirit at state!” he said.

Trump's angry tweet on Tillerson came after the former secretary of state, in an interview to CBS News, was critical of the president.

"I think he grew tired of me being the guy everyday that told him, 'You can't do that, and let's talk about what we can do,'" Tillerson said in his interview. "He acts on his instincts, in some respects it looks like impulsiveness… But… it's not his intent to act on impulse. I think he really is trying to act on his instincts," he said.

"It's challenging for me coming from the disciplined, highly process-oriented ExxonMobil Corporation… to go to work for a man who is pretty undisciplined, doesn't like to read, doesn't read briefing reports, doesn't like to get into the details of a lot of things. "But rather just kind of says, 'Look, this is what I believe and you can try to convince me otherwise,' but most of the time you're not going to do that," Tillerson said.

"I think part of it (differences) was obviously we are starkly different in our styles. We did not have a common value system," he said.

"When the president would say, 'Here's what I want to do and here's how I want to do it,' I'd have to say to him, 'Mr. President, I understand what you want to do, but you can't do it that way. It violates the law. It violates a treaty.' You know, he got really frustrated," said the former CEO of ExxonMobil.

As the secretary of state, Tillerson had announced a 100-year plan for India. He visited India once as the top American diplomat. He was fired by Trump days before he was to participate in the first 'two plus two' dialogue with India. This was postponed and was held months later in September. Trump replaced, Tillerson with Mike Pompeo, who was the CIA Director at the time.