They don't want our IT guys, but they want our nurses, docs

US to offer 40,000 Green Cards to foreign medics while temporarily banning the issuance of work-based visas like H-1B 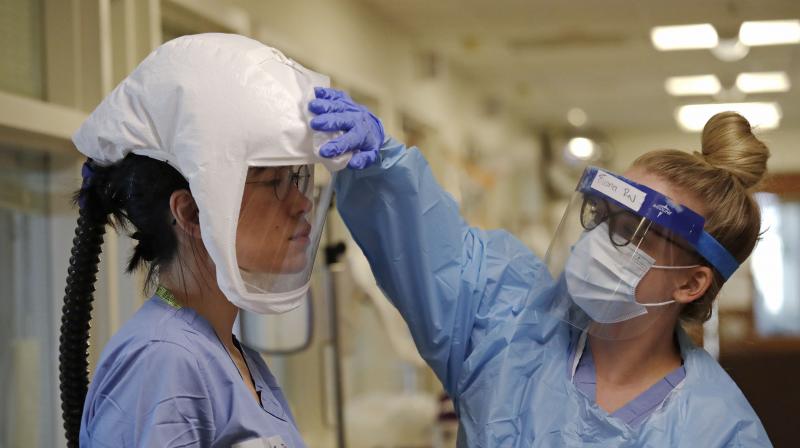 Liz Vereshko, left, is assisted into PPE equipment by fellow nurse Evana Croda before stepping into a patient's room in the COVID-19 Intensive Care Unit at Harborview Medical Center in Seattle. (AP)

Washington: Several American lawmakers have introduced a legislation in Congress to offer the 40,000 unused green cards to thousands of foreign nurses and doctors to meet the urgent needs of the overstretched healthcare sector in the US, the worst hit nation by the coronavirus pandemic.

The Healthcare Workforce Resilience Act would allow for recapturing green cards that were approved by Congress but unused in past years, allowing thousands of additional medical professionals to serve permanently in the United States.

The legislation would send green cards to 25,000 nurses and 15,000 doctors during the COVID-19 pandemic and ensure that states like Iowa have the professionals they need to serve patients for years to come, a media release said.

The move is likely to benefit a large number of Indian nurses and doctors in the US, who are either on H-1B or J2 visas.

The H-1B visa is a non-immigrant visa that allows US companies to employ foreign workers in speciality occupations that require theoretical or technical expertise. Companies depend on it to hire tens of thousands of employees each year from countries like India and China.

A Green Card, known officially as a Permanent Resident Card, is a document issued to immigrants to the US as evidence that the bearer has been granted the privilege of residing permanently.

In the House of Representatives, the legislation has been introduced by lawmakers Abby Finkenauer, Brad Schneider, Tom Cole and Don Bacon. The bipartisan Senate companion bill is led by Senators David Perdue, Dick Durbin, Todd Young and Chris Coons.

"We need all hands on deck to address this generational crisis," congresswoman Finkenauer said.

"We know this virus will not magically disappear and experts like Dr Anthony Fauci are warning of a second wave this fall. Rural areas, which make up much of my district, remain especially vulnerable and are already experiencing a shortage of medical professionals," she said.

"Physicians fighting COVID-19 are eager to hear these words: reinforcements are on the way. Recapturing 15,000 unused immigrant visas for physicians through the Healthcare Workforce Resilience Act would ease the burden on frontline physicians, who are risking their lives in understaffed hospitals," said Patrice A Harris, president of the American Medical Association.

The American Hospital Association (AHA) and the American Organization for Nursing Leadership (AONL) said there has never been a more urgent need for the care that foreign-born physicians and foreign-trained nurses provide than during the current COVID-19 pandemic. These professionals play a critical role in ensuring the health of our communities, they said.